Local to national to international. The world is divided. And other rants! 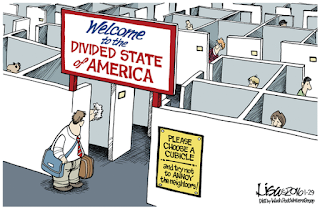 President Trump gave a great speech today at the UN General Assembly.  It was not "smooth" like the politicians we hear most often.  They use weasel words and flowing language and say nothing.  But they sound great.  Trump is not like that at all.  Plain spoken, stark and too the point.  North Korea and Iran better look out.  Especially"Rocket Man" Kim Jong Un of North Korea.  And if he does do something stupid and attacks us or our allies, he will be toast.  Trump said that in no uncertain terms.  Same fo Iran.  He was against the Obama/Kerry Iran deal from the gitgo.  And we see them developing the nukes they will someday use on Israel and us.  So watch out Iran and you fascist Mullahs.  You will be tossed by your people if you try to overreach.

The UN delegates were apoplectic.  Not as much though as the American "lamestream media".  They could not believe Trump said "America First"!  Oh my, what are liberals to think?  Well, I say we are tired of the other countries trashing us after we give them their welfare checks.  And maybe we should suspend all of our giving, money, goods and medical help, for a few years and see what happens.  America never went out to conquer for territory and hegemony over others.  We defended freedom and defeated fascism and Imperialism at the cost of many lives.  And the thanks we get?  Dissing us at every opportunity.  It is nice to hear our President stick up for America rather than apologize to countries that can't wash my feet.

Even here in California, we see these people on the left who are never happy emoting on silly things like a "fake news" forum.  I say who cares?  But local liberal buffoon, Jeff Pelline, thinks people care what he says or writes about.  His disdain for the local people is evident with everything he writes.  Why did he move ere then?  Did he research the county before moving here?  I think he did and in his pea brain thought he could make Nevada County Great Again in his image.  Every litttle misspelling in the Union Newspaper is criticized.  Well, it seems he could have done better but somehow he didn't.  He was the Union Editor for a while until he was booted out.  My old friend Jeff Ackerman did that deed and all of us thank him every day for that!

But does the criticism seen every day by Pelline ring at all with anyone?  Nope.  Just a couple of nutcases on his blog but nowhere else.  We look at him with incredulity.  He is the butt of jokes and yet he stays the course of dissing all the "podunks" of the county.

And California!  We have seen the erosion of Republicans in the running of the state.  Many have left for other states where they have a chance at success.  Of course, the wealth of the state is in the urban areas where technology companies are located.  And that is fine.  But the rest of the state is left behind and the powers could care less.  Our poor Assemblyman and State Senator have 15 or so counties.  Where a Single county like LA or SF have many.  We don't have a chance at representation or fairness.  And our farmers and timbermen and miners and others in the natural resource business are regulated into obscurity. The state needs housing for the poor and middle class and the brilliant minds of California government think a BOND issue is an answer.  But that is always their answer.  Take more money from the people who are working hard and transfer it into their coffers in Sacramento. The FIRE FEE was the lasy illegal boondoggle they foisted on 800,000 rural property owners.  And it was passed right after the people of the state voted they could not do that without a VOTE!  But hey, we have a dictatorship of one party.  The democrat party is now the tyrant.  One Party, one direction.  And the people get screwed.  Gas tax increases and registration increase by FIAT.  So all you barely making it will be sending billions to those scofflaws in Sacramento.  That is what we get when one party has a super majority.

Nationally we certainly are a divided nation but not like you think.  We are urban versus rural and suburban. I wonder how divided we would stay if the food and resources from the hinterlands were interfered with?  Those urbanites might think twice in their public disdain for us in the country.  And NO, I did not watch the Emmy's.  I can't stand them or the Oscars anymore.  All those snobs trashing us and our President and telling us how stupid we are.  I say cut off their water, trash pickup, and gasoline and see what happens.  But they did show us all what kind of people thy are.  They have less class than a homeless dude on Sutton Way in Grass Valley.  At least he is thankful for that Food Bank and Welfare check.

Then there are those loony professors teaching our kids!  The nutty professor from John Jay College who appeared on Tucker Carlson's show the other night was a prime example.  As is the woman teacher running "By Any Means Possible".  She tried to knock out a guy at a free speech rally in Berkeley but instead got her mug smacked.  Sorry I have no sympathy for her at all.  Now we see the left trying to say the ANTIFA is just a right wing construct.  Amazing, they can't even take credit for their own invention.  And Antifa is getting their ass kicked by the "Bikers for Trump" and others when they come face to face.  We see the little snowflakes run for cover when confronted. Good.

America is divided politically but I see way more people in the center and the right than the left.  And it is because the more people see the lefty-loons on TV and in these rallies the better.  People are mostly fair-minded and these lefty loons are way out there in the ozones of reality.  And they are unfair in most everything.  Most are hypocrites.  America is coming around in my view and that is why a plain speaking man like Trump won.  We will see that happen more and more over time.  The democrats and liberals are on their way to the dustbin.
Posted by Todd Juvinall at 11:07 AM