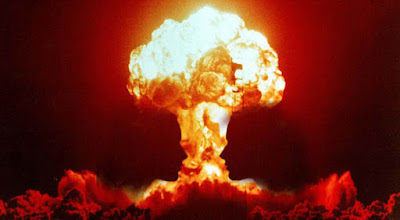 I have to shake my head in disbelief everytime some leftwingnut spews their hate for Trump.  I am talking about the American left and their lemmings in the democrat/media complex.  Here we have a unhinged fat boy in North Korea who apparently is off his twinkies and may be bi-polar, telling the world he will nuke America!  And now says he will shoot four missiles at Guam!  And so Trump says "look you fat-ass punk, do that and you will be toast, literally!  As will your country and people".  Seems kind of reasonable when dealing wth a bully.  But wait!

Amer4ican liberals say Trump's response is unwarranted and dangerous!  So what did Trump say in response to the "snowflakes"?  He said that was not strong enough!  I like that.  And General Mattis has chimed in to warn fatboy that North Korea will be  a wasteland if he does anything like he is shouting.  Good.  This is how you deal with bullies.  And when a bully has a nuke you have to hope he will not use it and just shut his mouth.  Fatboy is a rogue big mouth of a nation of 25 million people he is starving to death.  To pay for the nukes and their delivery systems he makes the people eat their own leather shoes to survive.

The regime has to go.  I say load C-130 transports with New York Steaks and airdrop them over the country.  There will be a massive response and the people will kick that fat-ass out of power.  Of course the Norks have thousands of conventional artillery aimed at Seoul and the other cites along the border.  And he will probably fire them if there is a provocation or attack.  So hopefully our military has a strategy to take them out.  Maybe carpet bombing by B-52's?  So there seems to be no easy fix and many people will die if the tinpot dictator of North Korea does not come to his senses.

Back to the unhinged left of America.  It seems to me they never learn that you have to confront the killers and not just try to sweet talk them.  Obama and Clinton set all this up and of course.  This outcome was something many of us knew would come to pass.  You give these killers any wiggle room to cheat and they will.  Obama and Clinton did.  In fact Clinton sold our missile guidance secrets to the Chi-coms for cash back in 1996.  Maybe Al Gore forgot to put that in his new "Global Warming" movie?  Maybe that is what he means when all these nukes go off.  The earth will warm from the explosions.

Anyway, if Trump confronts the rat Nork, that is fine with me.  The American left should shut up and let Trump do the foreign policy.  The left should just stay in their momma's basement playing NUKE video games and leave the world to the grownups.
Posted by Todd Juvinall at 3:35 PM