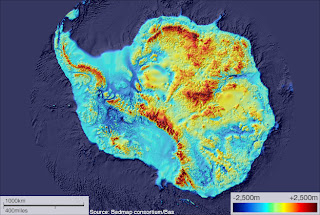 I love geography and when I run across a story on some new discovery or theory about our planet I usually read it.  The BBC has a article about the bottom of the earth and how the geologists have put 27 million bits of information together to let us see what the place looks like of there is no ice.  HERE is the article.

I didn't know that microwaves could go right through the ice to the rock surfaces but now I do.  The continent is the only place on the planet not owned by any country.  All can explore it and maybe when it is finished we can see what the last land mass has to show us.  Since we have been told the land masses have moved around the surface of the planet and were all once connected maybe there is some of earths secrets of its beginnings to be found.  The tallest mountains on the continent are still covered by a mile of ice.  What could really lie beneath?  Along with the deep oceans, the continent of ice (it has 70% of the earths freshwater) is still an unknown in many ways.  Unfortunately though the article does try and make a case for "global warming" and "rising sea levels" even though there is no evidence in the sea levels rising.

So check out the pictures and as I do, think of all the things that Antarctica could contain.  Better than science fiction!
Posted by Todd Juvinall at 7:25 AM