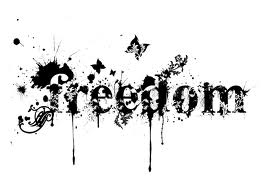 It is so refreshing to read common sense in this land of political correctness.  Having known Mr. Ackerman since 1984 or so, I can tell you all, the man has common sense.  Well, except about motorcycles maybe.  HERE is his latest article on a topic many of us on the right, we freedom loving folks, agree wholeheartedly with.  California is not very free and there is a study to prove it.

The study was done by Mercatus Center at George Mason University.

California was once the place people fled to because the reputation of the state was of a place you could spread your wings and be free to do what you want to do, of course without hurting others.  Over the years though, the democrats, those lovers of "progressive" thought and actions, gained the majority and have held it at the legislative level here for most of my life and I am 61!  They churn out thousands of laws every session and when you add them up, for every one they pass, you must deduct a bit of freedom from the ledger.  Those liberals in charge who as Ackerman stated, want and do regulate "transfat" are on the other hand wanting marijuana to be unregulated!  It is all in who has the power to implement the harebrained ideas.

On the front page of our Union today was the story of the "toy run" put together by Thom Staser.  Thom and I were classmates in school and if there was a freedom loving fellow around here it is Thom.  I even got to ride in the "toy run" as a Assembly candidate in the beginning of the run.  Thom and I held the same opinion on motorcycle helmets and we could not believe that Pete Wilson, Governor and Republican, would sign that into law.  Well he did and we got a preview of how the laws diminishing personal freedom get passed.

The left and some misguided on the right, use the "benefit" and "impact" of a persons action or activity to justify the "police power" of the state.  In the helmet issue, the left used the idea that people on a motorcycle who then had an accident and say, injured their heads, would become a burden on the general taxpayer for medical help.  This was how they did it!  It worked to goad people into voting it into law. Of course this strategy was used for smoking and "second hand" smoking so the left had a baseline strategy for any new law diminishing personal freedom.

Well, when one looks at laws it is without a doubt one person, or a group of peoples, desire to control others. When I was a county Supervisor  I used to tell people who wanted me to pass laws to punish their neighbor that, remember, if we do pass it, your neighbor can then do to you what you are wanting to do to them.  It turns out when you are a elected official at the local level most of your time is mediating disputes between a government official and a constituent.  No matter how many words are written in a law, there is always someone who can dispute its intent and implementation.  I had to help folks all the time and I must say that was my most important job as a Supervisor.  A balanced budget was second, but we always had one.

So Ackerman has once again riled the liberal of our area with his talk of personal freedom and less interference in our lives.  The left, a bunch of schizophrenics as far as I can tell need to take their daily meds for "hypocrisy" fits.  Most people in California are unaware of all these laws going into affect on January 1 every year or session.  We rely on the press to tell us.  I would like to see every law have a sunset clause so when it is not working it just goes away.  But, we know that won't happen when the left has the reins.

So as Mr. Ackerman has mentioned, when you get out of bed in the morning you are probably going to break some laws and you won't even know it.  Along with the courts passing judgements on us too, we Californians don't have a chance.
Posted by Todd Juvinall at 8:42 AM