Why people have a low opinion of lawyers. Cohen may be a example. 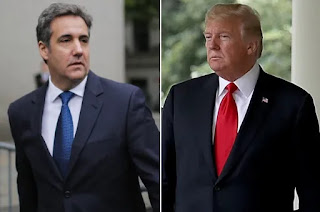 Why in the hell would the House of Representatives run by the democrat party, invite this guy to testify?  He already did and then was arrested and convicted of lying to this very committee!  Would any rational person believe anything this guy says?  Not me or any other reasonable person.  Liars like Cohen are shunned for the most part.  But the democrats have this fellow traveler who they think will drop some verbal bombs that will convict Trump.  Then they can impeach.

But it is all backfiring and the democrats are being shown to be the vacuous people they truly are.  And who is paying Cohen's lawyer, Lanny Davis?  Tom Steyer?  A billionaire "true believer" in man made climate change hysteria?  Probably a lot of the other billionaires that hate Trump as well.  And all tied at the hip with the democrats.

So what have we heard?  Simply gobbley-goop.  No collusion, no illegal activity by Trump, just a bunch of finger pointing by Trump haters.  No proof.  No facts.  This kind of stuff the democrats are doing has not been seen since the "show-trials" of the old USSR.  I hope these stupid democrats keep it up.  Along with their other loony "Green New Deals" and "infanticide" laws passed in New York and Vermont, we are seeing the true ideology of these lovelies.  So I say keep it up and soon the bulk of the voters of America will send you to the dustbin of history.
Posted by Todd Juvinall at 11:21 AM