Tea Party Party Last Night, my guess, it was a big success

I was invited to the Party last night by my friend Bob White.  He and I became friends back in the mid 90's when he was appointed Planning Commissioner by District Three Supervisor, Jim Weir.  We all thought he was going to be a lefty like his appointer but he tirned out to be a very smart, pro property rights guy.  His support of property rights was quite a shock to the left and to his credit, Weir left him on the PC.

So Bob, his wife and daughter and some others sat with me at the table and we watched a fully packed building, the old senior center, erupt in song, laughter and speeches.  Congressmen Tom McClintock spoke and as usual, he did a fine job.  He reminded us of our history and gave us some updates to what is going on in DC.  I must say, the Tea Party members were very grateful that he is representing their views on most of the debt, deficit and Obamacare issues.

Later, Tea Party founder, Mark Meckler spoke and he sounded just like I would imagine Thomas Paine sounded two hundred and fifty years ago.  Meckler is from Chicago Park here in our little county.  I think I heard him say he is now a Virginian.  He is working on the next phase of taking America back from the usurpers.  He is trying to put together a Article Five, Constitutional Convention.  He spoke at length about what those words mean in Article Five of the Constitution and how to make it happen.  He has a book coming out about all this.  (I am not as positive it is such a good thing however).  The people were ecstatic that he was in their midst and he and Tom received standing O's.

Those people at the Party seemed to me to be the salt of the earth people America has millions of.  I sat next to a retired policeman and his wife.  At the table was Bob White, a mould maker, his wife a realtor their daughter a worker in a local business and a fire fighter and his wife.  I saw many people I knew and many I don't.  They simply want the government to reduce drastically its presence in their lives, balance the budget and behave in a Constitutional manner.  Pretty simple.

All in all it was a pleasant night and I did not see or hear one liberal whining!  I bet there was not one there!  So a liberal free zone is really pleasant.  The people were friendly, the food and wine tasty and the whole evening was well run, just like America is supposed to run.  Here are some pictures I took from my camera ma. 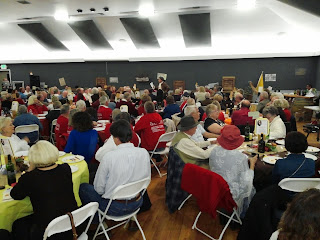 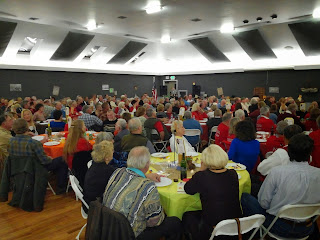 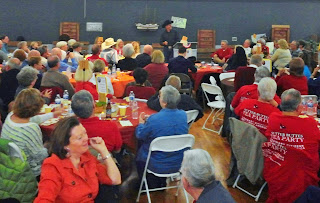