Yes it has been 50 years since the communist, Lee Harvey Oswald murdered our President.  I was in the eighth grade at the Junior High on Park Avenue in Grass valley and we had just broken from class around 11 AM I think.  The word spread fast that the President had been shot and his condition was unknown.  The Principal called an assembly shortly thereafter and all of us filed into the auditorium.

Through a bunch of tears, our  Principal told us that the President had been shot and was killed in Dallas Texas.  Most of the kids including me were not yet into politics and the words of his murder did not have the same affect on us as it did our teachers and other adults.  There were a few of my schoolmates who did cry.

The whole week after the murder I paid attention to what was happening.  I watched the oath of office being given to LBJ, I saw the sadness in the face of Jacqueline Kennedy.  I watched the caissons taking him down the boulevard to his place of rest.  It dawned on me early in this assassination just what we lost.  A President is like Ironman.  He should not be able to be harmed but here he was, dead.  So we all grew up pretty quick throughout this time.

Others can recount the President's life story, PT-109, his family's fortune, his philandering and especially his papa.  I simply recall him as a nice looking man with a very beautiful wife and two kids.  I never got into the conspiracy theories about a man on the grassy knoll and/or other shooters.  Or it was Castro or the mafia.  Others spend their time on those things.  I will always be sad for the times America could have had had this man lived a full life.  But not to be.  Communists killed him, simple as that.  But I guess those bastards are all dead now so it matters not.

I remember this  picture the most from the funeral procession.  It still tears at my heart. 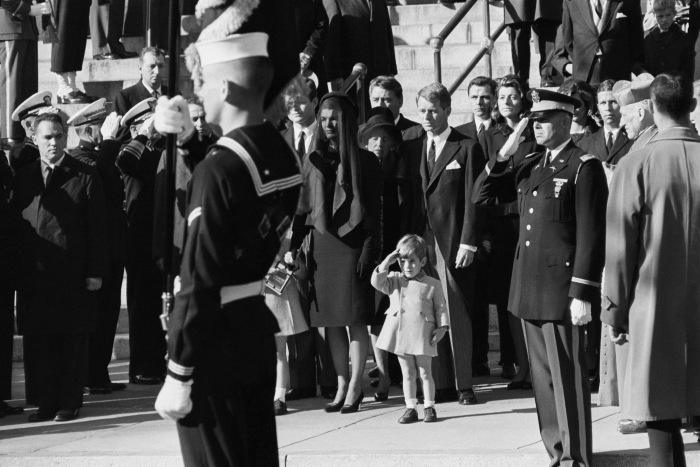 Posted by Todd Juvinall at 5:08 PM