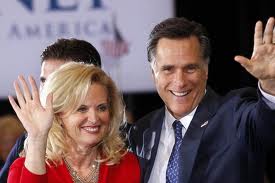 HERE is the link to his inspiring speech.

Now that Romney will be the nominee, polling has been fairly consistent showing him ahead or in a dead heat with Obama.  I chuckled at the primary reporting when the press was so sure the R's were eating their own young and destroying their own credibility with the voters with all the fighting.  Having been through it in our little county I knew things would settle down almost instantly when a person became the front runner.  That is what has happened.

HERE is the Real Clear Politics website on the polls and their averages.


HERE are the results of the primaries today so far as of this posting.

I tell you, after watching Romney's speech to the NRA and then his tonight, we have a great candidate in my view.  He is truly Reaganesque.  I like his positive view, his unapologetic stand on American greatness and his pride in being a successful person in what America does best, business.  Did you know Romney gave away his inheritance to charity because he wanted to make it on his own?  Well, because he is a humble man, he won;t tell the story but over the course of the campaign America will get to know more about this good man.

Tonight Mitt and his speechwriters have countered Obama and his lackeys assertions about American "fairness".  Listen to the speech and you will be inspired.  Finally, someone is tossing the phony-baloney democrat crap "fairness" into the trash.  Romney has a better message.  He said he is opposed to the "unfairness" of the Obama administrations policies on housing, food stamps and unemployment.  It was great!

So finally we have a one on one.  One term Obama and looking forward to two terms of American success under Romney.  On to Orlando.
Posted by Todd Juvinall at 7:07 PM