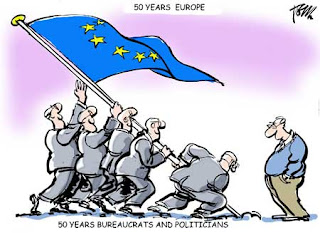 European "stimulus" mirroring our own American TARP and stimulus!  It appears no one in authority anywhere on the planet has learned anything about the solution to the problem.  Where is all this "money" coming from?  The EU is in turmoil yet they seem to be as dumb as the people we have in charge of the money supply here in the USA.

One thing this ECB infusion of cash won't do they say is ease the huge debt problems of the governments of the EU themselves!  That is the problem!  Here is a piece of the article I found quite fascinating regarding this action by the "smartest" people on the block in Europe.

"The ECB loans also do not do much to reduce heavy levels of government debt. There was some speculation that banks could borrow money cheap from the ECB operation and buy higher-yielding government bonds.
But many analysts think it is unlikely they will increase their exposure to government bonds amid fears of default. Many banks have cut their holdings of debt from governments that are in financial trouble."
So we see the same problems in the EU as we see here in the USA.  No stomach for letting the free market do the adjustments to the problems.  Their governments will not fix their overspending and pension issues, just as we seem unable to do here.  The banks get all this free from interest money then hoard it and the "Main Streets" get nothing.  What the heck are these politicians and bankers stabilizing then?
My guess is there will be no attempts to fix the main problems. This is the EU kicking" the can down the road.  With China's economy overheating there will be no way to fix the problem since the Chinese  are not real interested in buying EU debt either.  Until all these "western" governments let the free market system do its work, there will be no fixes.  I expect the EU did this temporary, three year loan to keep the new slaves of socialism quiet and off the streets.  The hope of these "smart" people is that time will allow them to figure it all out.  I don't think any amount of time will allow that to happen.  Just like we see here in the USA, when government intercedes in the free market it makes things worse.
HERE is the full article.
Posted by Todd Juvinall at 8:21 AM