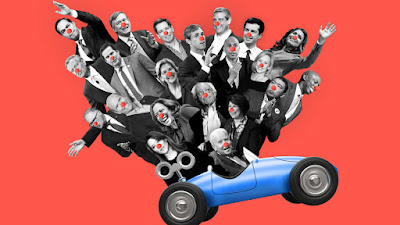 What a week and month we saw in October and now November in regards to the lunacy of the democrat party and its adherents.  And now they seem to be exiting the race for President and as they exit the remainder are becoming shrill and nasty to each other.  That is a natural progression when many people want to grasp the one remaining straw.  Luckily for America, these people are so out in the ozone of reality we can make an early decision on their competence.  And there is not much to be found.

Beto O'Rourke left the race this week and increased to IQ of the remaining people by ten points.  How that idiot ever thought his flailing arms would elect him to the highest office in the land is a testament to his hubris.  We got entertained (if you like pain) by his teeth cleaning, tire changing and skateboarding.  He is a man-child of the left.  He had all the best.  Married into wealth and never apparently met a payroll.  He is a buffoon and a clown.  A perfect fit for the clown car.

Elizabeth "Fauxcohontas" Warren released her "Medicare for all" this week and actually defended it.  52 trillion dollars over ten years!  Some analysts have said 60 trillion.  And she will pay for it with a six-cent tax ad on to incomes over a billion bucks.  Lizzy, you could confiscate every dime of the whole economy of the USA and still be short.  All this machination to say she will not tax the middle class.  Sorry honey, that is impossible.  And as a Professor can I ask you if you ever took math?  She cannot make her fantasy happen but she will lie her way about it forward.  She hopes the people we thought were educated in our schools would be so dumb they would believe her. Afterall she told us so many lies about her personal life who would think she knows the truth? Oh, and she will take away 180 million Americans medical insurance to replace it with DMV level service.

Joe Biden and his son thought they got away with a "pay to play" when Joe was VP under Obama.  Millions of dollars went into the son's bank accounts.  Ukraine and China and maybe more countries wanted access to Obama through Biden.  And they got it.  When President Trump tries to get the truth about that from the 2016 election the loony democrats want to impeach him.  I think they are in a massive coverup for Biden and Obama.  Corrupt to the core.  We have all seen the Joe Biden on video bragging how he did a "quid pro quo" with the (at the time) corrupt Ukrainian government to rid his son's company of an investigation.  But the democrats claim that was just fine.  Yet tell us Trump did the same thing and that is impeachable?  We all see the fallacy of their hypocrisy.  They recruited a Biden/Obama spy to remain in the White House and to leak inner details.  I say that is a treasonous act.  But the democrats set this up to take out Trump and it now appears to be falling apart.  They decide to take their secret investigation out into the light after the country was outraged they were trying to impeach in secret.  And Adam Schiff the chairman of the House Intelligence Committee (an oxymoron) has been exposed as a liar and leaker.  No one except true believers on the left thinks the man is credible.

And we got to see a Congresswoman, Katie Hill, announce her resignation from Congress.  A democrat hypocrite too.  She was screwing her help and using campaign funds as gifts.  All illegal unacceptable in the "me too" era.  But now she says she is the victim!  That is what democrats do when caught.  Blame others and never accept personal responsibility.  Just as we see Hillary Clinton doing every day.  Hillary please, you got your ass kicked please accept it and retire from public exposure.  America can then heal from your lousy political schemes.  After all it was you that colluded and paid Russians in the election, not Trump.

We hear that the clown car may get some new occupants to replace those leaving.  Hillary Clinton, Michelle Obama Bloomberg and maybe Oprah Winfrey!  I just don't see anyone on their side that can defeat Trump.  His rallies are packed and the people are so happy!  But we have to remain vigilant.  Just this week we saw the Washington Post lie about what was testified in Schiffs Committee.  A person on the phone call to the Ukrainian President said there was nothing wrong with the call.  Yet the Post lied and said he testified there was.  And then their headline on the demise of Al-Baghdadi, the ISIS founder and head terrorist.  The post could not even give Trump a thumb's up.  Disgusting, but expected.

That is the playing field all Americans must expect.  No good news for Trump or Republicans reported.  All good for democrats.  And the most impossible mind-bending jujitsu by the press to change good into bad must really hurt their limited brain powers.  We know though.  We have conservative sources and many more than ever.  We see the mainstream media going BK as people flee their lying articles for places we can read and hear the truth.  Don't let those lefty types belittle your sources as they try to do with me.  I read and study all sides and when push comes to shove, the left is all lies.  My trusted sources are reliable.  As we see the clowns yapping their fantasies in the first few democrat primary states, just remember this.  All BS and impossible.  Don't fall for it.