USS Hornet, a long history of service (since the Revolutionary War) 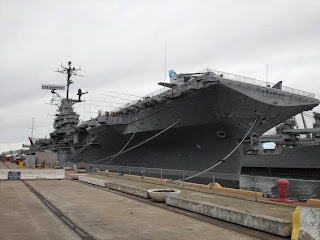 I was watching our old  friend Huell Howser on a old segment he did a few uears ago of California's Gold.  It was about his tour of the Hornet and it peaked my interest.  So, I checked out the website printed a map and directions and decided to go see the aircraft carrier.  My pop was in the Navy during WW2 and was on a carrier for three years out in the Pacific.  Though he never talked about his war years, I wanted to see what and how these brave Americans lived on these great ships.

HERE is the website for a lot of the details on the Hornet.

The tour was a long one and there was a lot of up and down the stairways.  The placement of your feet was important since the stair treads were short and steep.  If OSHA finds out they will probably come and fine the museum.

The Docent was a Vietnam veteran and he was very informed about the ship and all its parts.  He was very interesting.  The tour cost 16 bucks and was well worth it.  Apparently though, the City f Alameda is playing some games with the Museum and they are thinking of moving the Hornet to another port.  Since we all saw San Fransisco shun a battleship a few years ago, it may not be moored in the Bay Area in the future.  I hope Alameda gets their heads out of their ass about this.

I took some pictures with my phone and hopefully you readers can appreciate the life a sailor had in those days on one of these carriers.  The Docent told us the biggest fear of all was fire.  Every single sailor was a trained fireman.  So, read up on this ship and if you can go visit.  It is an ongoing restoration project.  When I was there last week the Museum was preparing for a massive Google Company Party and the tents were simply massive. 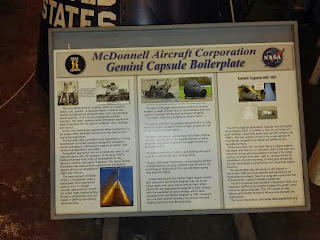