California Government jackboots don't work very well, or how to love a "super-majority" and think you have freedom and prosperity

I was watching a California News Magazine this morning and the Assemblyman from the San Bernardine area was being interviewed,  It was quite interesting.  I have always believed, "as goes California, so goes the country" in regards to innovation, laws, and regulations.  In the the old days it was something I was proud of but not now. 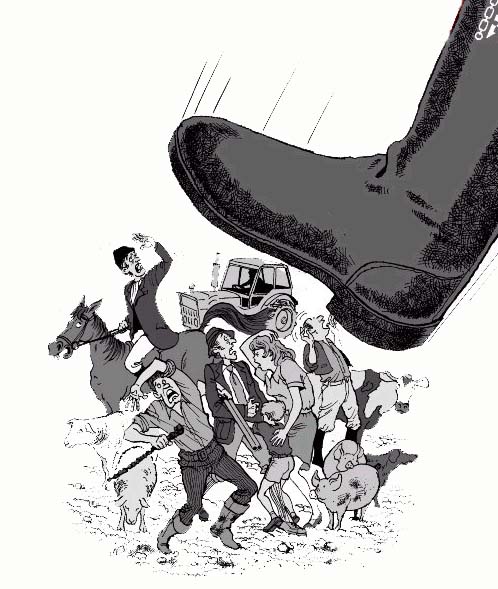 I shudder when I read how nutty our state has become.  We are now "super-majority" democrat in the legislature.  Even though the democrats are a few points ahead in the number of registered voters, the reality is the "independents", and "decline to state" voters (21%) are not represented in our plurality system.  So, because the indies/DTS either don't vote or vote for the democrats at the general elections, California gets a democrat legislator.  We all can now see what has transpired over the years with these touchy-freely men and women

The left has a stranglehold on the Capitol.  They are "gerrymandered" into power by the sham they hijacked a couple of years ago called the "Redistricting Committee" voted in by the people.  Those democrats are so good at subterfuge that even I thought the answer to our governance getting back on its feet would be solved by the redistricting.  My was I wrong.  It got much worse.  Even our courts are now corrupted as well having upheld the thefts.   You decline to state people, are you happy now?

HERE is the reason, or should I say the result, of all this power lying in the hands of these lefty nuts running the California asylum.  We are a fool's paradise except for a couple of things, technology and venture capital, but last or close to it on all the other categories.  Read it and weep.  The Golden Goose has been eaten by the voracious regulators we call legislators (and their bureaucracy), and their signatory pal, Governor Brown.  These ranking break my heart.  We have 38 million people and I assume they have a brain, but when they vote they become zombies it appears.  Look at the rankings again.  If you can see any future for the children of our state, please leave a comment and tell us where.

During the interview the journalist and the Assemblyman discussed the now infamous AB 1266 passed this year and signed by the Gooberman.  It is the bill by the nut from San Francisco allowing our kids to determine which "sex" they are in the schools!  If the boy determines he wants to be a girl and attend the girls locker room and showers, this bill let's him.  And vice-verse.  Boys and girls can choose which sports they will involve themselves in.  So a 100 pound  girl could play tackle football and the boys can do water ballet I suppose. HERE is a question and answer page if you care to read it.

The reason I bring this up is look at the education ranking.  Now instead of promoting the 3 R's and STEM to get our kids prepared for the real working world, our legislators spend their political capital preparing these young minds full of mush for street walking on Castro!  I suppose they may learn something about money as these poor confused people dicker for a price.  But is that what we expect?

Somehow, the 23% or more of the "decline to state" independent voters will have to decide they too are being shortchanged by the kids under the dome (they have not one representative for their overall 23% of the voters).  If they do and flex their voters muscle to either vote the nuts out or fix he election laws, they too will be unable to make a life here.  The rankings are pretty clear.  State's that allow freedom, business and personal, less regulations and all the rest, are at the top.  Our state that sees fit to control everything, especially for the perverted minority, and taxes and regulates all things, is last or close to it.  Sure we have the best weather, but that doesn't supply anything except personal; physical comfort for those in the unemployment lines.  The jobs vamoosed!

So our state has 12% of the total population and has 30% plus of the welfare.  We are a mess waiting to be cleaned up.  Only the DTS and independent voters can fix this.  What to do, what to do?
Posted by Todd Juvinall at 9:28 AM