Russia may have a real Presidential election next year 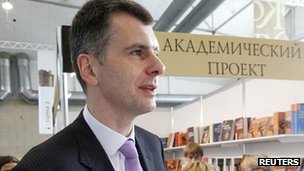 Vladimir Putin may have a challenger!  HERE and HERE are two articles announcing the possible campaign. Metals tycoon, Mikhail Prokhorov must gather 2.5 million signatures to qualify for a run at Putin.  Will he live to see the race?  That Putin is pretty wily and he knows how to make people disappear.  He was of course the leader of the KGB and knows all the tricks of the trade.

Just ask Poland's surviving leaders.  Some say Putin and his cronies were responsible for the crash of the plane transporting the Polish leaders a couple of years ago.  They crossed Putin and POOF!  They were gone!

Mikhail Prokhorov is the owner of the NBA's New Jersey Nets and I watched a bit of his interview by 60 Minutes.  He is a young guy and is sick and tired of the Putin led quasi-communist government.  He knows a person must still pay off the right people to get a permit in Russia and he is sick of it.  It will be interesting to see such a highly visible person run against Putin.  Putin seems to be able to jail those that disagree with him and if Putin wins again he will be there for another 12 years!  If Russia is to get into the 21st Century, the Russian people need some turnover in their leadership to cull all these old KGB types.

So, we will see if this brave fellow will make it into the runoff without some sort of accident.  My guess is he won't.
Posted by Todd Juvinall at 7:57 AM