Democrats and their Fake News Mouthpieces are unAmerican 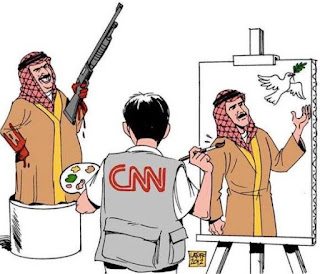 What is happening with the opposition party and the mainstream media?   If anyone had a doubt about the allegiance to America by these lovelies the last week proves they are not on board the America train. Trump and our military took out an avowed terrorist with a drone strike in Baghdad last week.  The scumbag had a pal from another terrorist group with him in the car.  They are now enjoying 72 raisins in Islam heaven.  President Obama had designated Qasim Sulemani as a terrorist many years ago.  The man became a General in Iran and carried his killing ways all over the middle east and even in his own country.  He was a legal and perfect target since we are at war with terrorism.  Yet his demise at the hands of America is called a "assassination" by the left here.  The media tried to make us feel sorry for the guy.  Calling him "revered" in his country and much more.  They failed to tell you about his crimes.  Only FOX News told us the truth.

I was infuriated about the fake news reports and the democrats support for this evil.  But that seems to be the way it is when Donald Trump acts.  The left and the media would attack Trump is he cured cancer.  They all have Trump Derangement Syndrome (TDS).  No matter what he does they trash it.  America is on a roll economically yet the left cries that things are terrible.  And the media dutifully reports the lies as if they are true.  Facts don't matter to them when they are reporting on Trump.  Half the country has given up on the media.  When faced with their lies the media never apologize and then they double down.  Yet we can actually get the truth from other areas of information and we do.  Newspapers and media companies like CNN are going broke as people say no more lies!


This Sulemani dude was the inventor of an IED that could penetrate the armor of our vehicles in Afghanistan and Iraq.  The military estimates over 600 boys were killed and many more maimed by those explosive devices.  Yet not a word about that from the lamestream fake news media.  Except for FOX.  Why would the media withhold these facts?  Trump hate.  It truly is a sad day for our country when we expect the truth from those given First Amendment Protection to do so.  Hopefully, these liars in the media will seek help for their TDS and retire to find a suitable job for their education levels.  Maybe a sewer plant operator? Or a garbage collector?  That might be a better fit for these creatures.

Now we see the media do their stenographic help for Nancy Pelosi and AOC etal regarding impeachment.  In my opinion, the articles she has failed to send to the Senate are unConstitutional.  Neither have any of the four reasons stated in the founding document.  I suggest they go to the SCOTUS and see if they agree before we get to listen to any more democrats fantasies about the Trump phone call.  But it probably won't happen that way.  At least Senate President McCoonnel did not let Pelosi call the shots.    It appears to me the nation is rejecting the House Democrats attempt at a COUP again.  Maybe we can regain the HOUSE in November and bring sanity back to the p[eople's house.