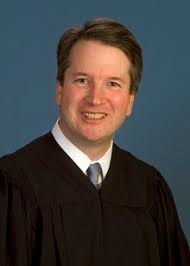 Here we go again.  The demonic left and their press sycophants are trying their best to smear a good man.  We all went through their fakery a year ago and it was as disgusting as it can get.  Democrats are so low that they have to look up to see a snake's belly.  This last weekend we all got to read the latest slander against Justice K and how it was spread far and wide.

It appears a book or a paper is coming out claiming he committed some nasty thing at a college party when he attended Yale.  The claim came from a lawyer who went to Yale with Kavanaugh and he claims the Justice plopped his penis onto the hand of some gal.  The lawyer is now outed as a member of the Clinton team fighting Bill's impeachment for lying about spilling his DNA on a blue dress.  Kavanaugh was on Ken Starr's team then.  Looks like payback to me and now we hear the true journalists writing the woman the Clinton lawyer claims received the penis has no recollection of the event.

It is, of course, made up BS just like it all was a year ago.  Kavanaugh is a conservative and that is what makes the blood boil in these unAmerican leftists in DC.  They have done their best to overthrow Trump with their lies and fakery about the election.  They created a silent coup saying Trump colluded with the Russians and Putin to defeat Hillary Clinton.  We found out the truth was the exact opposite.  Clinton hired people to creat a phony story and paid the Russians 11 million to spread it out.  Trump and his people rejected every attempt by the Russians to contact him and yet the fake news would have you believe that to be a lie.

The swamp inhabitants prior to Trump's election victory then tried to create another story that ended in the Mueller Report.  Crooked cops named Comey, McCabe, Rosenstein, and others tried to create another silent coup.  None of it worked and now the democrats are desperate to find something else.  Kavanaugh is a pervert, Trump is a colluder and a racist.  On and on we go.  In my opinion, this is all backfiring with the American people who remain filled with goodwill.  Democrats that believe these lies are hopeless and cannot be trusted to be fair.

It seems that we are bombarded every day of some terrible thing Trump is doing.  Now it is quite clear that the New York Times is crooked as are most national media.  We are under attack by fake news.  People must reject these sources like AP and Reuters and the big media.  All they are is propaganda machines for the left.  Seek out other sources and make sure you check things from all sides.  But be skeptical.  They make it sound real but if you dig down a bit you see they are crooked.

America is at a crossroads abut the truth.  The sources we once trusted are now corrupt.  So please don't let them infect you.
Posted by Todd Juvinall at 10:28 AM