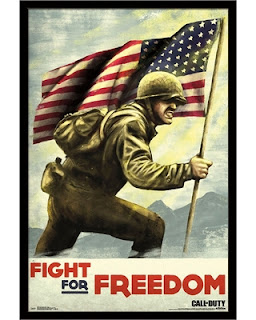 Freedom.  What does it cost?  Can you pay for it with money?  Goods?  Blood?  What exactly is it and should we care about it?  The answer is, of course, we have to care.  Many people, men, women children, gave their lives so we could experience something most humans never got to experience.  The planet's history is mostly one of power by a few over the many.  Kings and other royal titles ran the countries and the people of their countries up until 1776.

At that time and for another number of years men and women had to defeat the greatest power on earth to gain their independence and throw off the yoke of Britain.  When that was finally done, those same men and women sat down to create the Constitution.  A document to guide us into the future and one that provides a framework and set of laws for us to live by.  Finally a compact by the people to stop them from being cannon fodder for the King.

Humans though have a tendency to want to gain power over others and over the years we saw that play out in both World Wars and other smaller wars.  Tyrants are something we Americans dislike and we do our best to take them out or at least neutralize them.  Even at the end of WW1, we saw the danger of communism and President Wilson sent troops into Russia to assist the anti-communists.  It failed and we got that tyranny for 70 years and later it seeped into China and some other places.  We saw the rise of fascism in Italy and National Socialism in Germany.

And America got involved to try and rid the planet of these terrible ideologies and the men and women pushing them.  In 1933 Adolph Hitler came to power and soon became a dictator.  He pushed his people into a war with the world and America became his enemy in December 11941.  Hitler and his thugs murdered millions of people and would have come to America if millions of brave Americans had not stopped them.  Today marks the 75th Anniversary of the Normandy landing.  We also call it D-Day and The Longest Day.  The thousands of young men that stormed the beaches of France and scaled the cliffs saved the world.

The men that did not return are in many cemeteries above the beaches they retook from the Nazis.  They lie there but their souls are in heaven.  Today we celebrate them and our President is there to commemorate their sacrifice.  We owe these people the respect and remembrance they deserve.  I am not even sure the education system spends any time on this but they should.  Most young people don't even know what a Nazi is.  Or a fascist.  Some in America try to call our President those vile terms.  That tells me they are uninformed and that teachers need to start teaching the meanings.

We have freedom today because men and women from our past  gave their all to preserve it.  The least we can do is teach the young about them and make sure no one ever forgets these men and women of the "Greatest Generation"/
Posted by Todd Juvinall at 7:36 AM