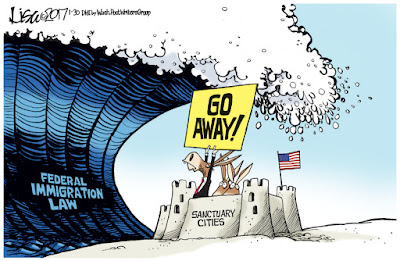 This last week was pretty amazing.  Attorney General Jeff Sessions has sued the state over its three new laws making California a "sanctuary state".  I watched the press conference and I am in agreement these "laws" need to be tossed.  They have nothing to do with the Tenth Amendment in my view.  Besides California's legislature and governors have never cared a hoot about their overbearing destruction of local governments here (they even stole all our redevelopment money).  Why are they so concerned by the US Constitution?  It is the "Supreme Law of the Land" and California signed a contract upon admission it would abide by the document.  And each and every officer swore a oath to uphold it.  Looks like our Legislature and the Governor are rebels and may be in the act of sedition.  A hanging offense.

Then we have the Oakland Mayor who alerted illegal alien felons the ICE agents were coming.  These liberals and democrats in charge of our state and local governments seem to be more concerned with criminals being protected then their own American citizens.  I can't seem to understand  what they are espousing.  And these elected buffoons are trying to get illegals the right to vote!  San Francisco is trying it now!  And the Governor has appointed a illegal woman to a State government panel in solidarity with illegals and non citizens!  These people are rebels ad need a comeuppance.  Maybe a little jail time for acting against their own country.

President Trump went to the San Diego area last week to review the samples of his wall.  He was shown around to all eight samples and he had some interesting words for us.  As a builder he has some common sense about constructions so it was clear he had a handle on what is needed.  He wants to see through the wall, he wants a top that is hard to secure a rope or other item too.  He wants to make the scaling of the wall very difficult.  And he wants to have Mexico pay for it.  Of course he could intercept money being sent to Mexican relatives from the USA to help pay for it and that makes his wish come true.  But the left and their ilk in the press are all about open borders.

The press and the democrats at all government levels are opposed to the wall as they know it will diminish the number of voters they may get later.  Since illegals drive down wages for citizens, why would the left be for that?  They want as many illegals to come in so they can try "amnesty" to legalize them and turn them into democrat voters.  Trump says nope.  I am for American citizens being paid more and we need to get the illegals out.  He did his best though on the DACA and even added another one million people to make a total of almost two million that would gain a path to citizenship.  But I think the Democrats were one upped by Trump and they could not go along with him.  Why?  Because those people might thank Trump and become Republican voters out of gratitude.

Also this last week we saw the "protests" across America by under age students ducking class to yell about  "gun violence" in America and the problem of school shootings.  We are all opposed to the murder of anyone especially our children.  But these "kids" were schooled by the left and they came out opposed to the NRA.  The NRA had nothing to do with these killers yet were blamed.  They actually teach gun safety and are also opposed to school shootings.  The issue to me is there are mentally ill people who should not get a weapon.  And the left that destroyed the America nuclear family is to blame for many of these atrocities.  No Dad in the home.  Women told the government is now the dad, no need of a male.  And the removal of ethics and moral teachings leads to this kind of lawless non-allegiance to truth and consequences.  Anyone that brings that up though is roundly beaten up by feminists and the lamestream press.

The assault on "white males" is also adding to the schism in our country.  Everyone who is not a white males seems to be blaming all their problems on white males.  White privilege is shouted out by those that can't seem to make it here.  Hell we pay 100% of a child's education K-12 and then subsidize Community College and University.  All this and free food, Section 8 rent payments and welfare and food stamps and even a car and gasoline credits!  And we are the bad guys?  It sound like a bunch of pikers to me.  Get off your couches and do something.  Stop the whining!  But it seems that message is lost as these pikers have decided it is easier to scream "whitey" than work.  I really thought America was past all that.  We transferred 5 trillion dollars to the less well off in my lifetime and the thanks we get is to be called names.  And they demand more!

Nationally we saw the firing of Mr. McCabe from the FBI.  Thank goodness.  But look at the fake news who claim Trump has a hand in this.  It was done internally and on the recommendation of the IG of the Justice Department.  But the press lies through their rotten green teeth that Trump did this.  And McCabe and his pal James Comey are teaming up and whining they were wronged by Trump.  Oh please, you break the rules or the law your ass is out.  Just like in the real world.  America is tired of you "civil servants" getting away with things others are prosecuted for.  What about Lois Lerner?  She deserves jail as well.  And many others.  How about Hillary Clinton?  She sold 20% of the nations Uranium to the Russians!  Sounds like a treasonous offense.  And then she has the temerity to cry in India this week that you "white women" are just pawns for your husband, your boss and even your sons.  You vote the way they tell you too or else.

In my experience a American woman would not allow herself to be talked to that way or to follow those orders.  Clinton is daft and still remains demented about why she lost.  It is all someone else's fault, she bears none.  Until she finally accepts she was a terrible candidate she will not heal.  My goodness she and her ilk tell us how rotten Trump is yet he beat her!  Accept it honey and retire to your Dacha in the Black Sea.

And one more monstrosity compiled by those kids under the dome in Sacramento.  We have a huge shortfall of housing for most income groups in California.  Homeless everywhere.  They are spreading trash and disease and live and sleep outside.  The defaecate in every city and town.  On the sidewalks and the lawns.  Yet the politicians running the state can't figure out how to fix it.  They refuse to reign in CEQA and all the regulations they put in place to thwart the construction of housing.  It is like Hillary Clinton times 121 here.  They refuse to accept they are the responsible party for the shortages and problems.  Today the Sierra Watch and their comrades of MAPF and others stopped a housing project in Placer County by Truckee.  They used CEQA and got a wimpass judge to agree they needed more info on FIRE and Evacuation.  That could easily be worked out without stopping the project.  But there you go, California idiocy.

There are a few bright spots in all this gloom though.  The City of Los Alamitos in southern California is debating whether to opt out of the State Sanctuary Laws passed a bit ago.  Brave to even discuss this in my view.  Maybe some of our local leaders will do the same?  And there are some people standing up to the lunacy of our Governor Brown and the dome lechers.  Travis Allen, a Republican from Huntington Beach was here last week to meet and greet locals.  I met him for the second time and I must say he is a problem solver.  I would hope he make it into the top two for the election.  We need to change that as well and there is going to be a initiative to do just that.  Our California system is broken and the elections are becoming a joke to us and the nation.