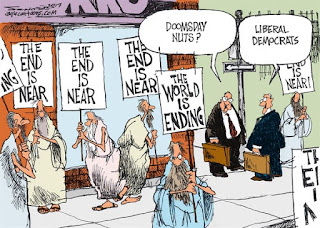 More hysteria from the left about why they lose elections nationally. Rather than taking responsibility for putting lousy candidates forward for the voters these liberals have to blame others for their failures. This screed by Stormsgaard is the latest.

Gerrymandering is only a problem when supposedly done by Republicans. Yet he does not mention the Northeast of America where not one republican congressman is elected in Massachusetts and Connecticut and Rhode Island. And his flawed analysis of why Obama or Hillary won certain states while losing the majority of Congressional seats is laughable. Americans usually like a divided government. So Obama or Hillary gain the states Electoral wins while the opponents gets the House and Senate. Nothing conspiratorial about that. And of course, the loser democrats cite the popular vote totals to gain sympathy in their hate for the Electoral College. But that is the rule. California supplied all the surplus democrat votes for Hillary. If left out then Trump wins the popular vote in the rest of the country.

And of course, the old lefty whine that Republicans and the states they control electorally "suppressed" the votes of "others" to gain an advantage. Of course, no proof exists for this but it does for the democrats. They are the suppressors yet Stormsgaard fails to alert you to that fact. America has over three thousand counties and they each are in charge of their electoral systems. Many are run by democrats. So look in the mirror democrats.

Lastly, Stormsgaard whines about the Citizens United decision by the US Supreme Court. He says that gives Republicans some sort of advantage in money for elections. Fake News again. Hillary Clinton and the democrats raised three, some say four times the money Trump did. And we know the results. Money is speech and the democrats will try their best to shut the opposition up. Thanks goodness rational people on the Supreme Court agree.

This country is divided, no doubt about it. But I say not because of those on the right. The democrats are all about keeping the pot stirred about any issue they use to get their way. I think we are coming to a point in the country of exhaustion. The left is relentlessly yapping about how bad the majority of Americans are and we are not seeing it. We have tried our best to get along in my lifetime since 1950. Yet every time we think we have achieved a step forward the left is there to drag us all back two steps. I say stop the whining democrats. California is now all yours and as a “super-majority”. All state office are democrat. No Republicans in sight. And look at the nirvana they have created here. NOT!
More hysteria from the left about why they lose elections nationally. Rather than taking responsibility for putting lousy candidates forward for the voters these liberals have to blame others for their failures. This screed by
Posted by Todd Juvinall at 7:59 AM