RECALL of Jerry Brown has begun 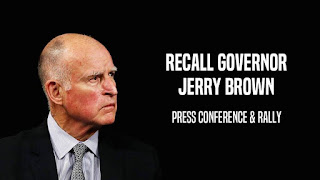 Maybe the people of the state of California have had enough.  Maybe?  Anyway, a gathering in Los Angeles today in front of the art-deco city hall is the start   Mac Young a local activist from South Nevada County was there and spoke.  Here is the link to the video.

https://www.facebook.com/makecaliforniagreatpac/videos/328005674272695/
I have never understood this "love affair" California democrats have with this man.  He has made this state the mess it is starting back in the 70's.  And the left gives him another shot at really screwing the state up.  Amazing.  And like most politicians, he says what he wants then changes his mind and does a 180-degree turn.  And these same democrats in California are overlooking all the Brown lies and laws and concentrate on Trump.  You really can't make this stuff up.  Sort of like a hypnotic trance by the left here in the once Golden State.

Of course Brown opened the laws up to allow public sector unions and we can see what a mess that is.  Along with the trillions in unfunded mandates for pensions and medical he doubled down on other things like "cap and trade" and vehicle registration.  He was against Prop 13 and when it passed he became its lover.  Another hypocritical move.  His own personal land on the North San Juan Ridge was purported to be growing marijuana back in the 70's.  Hmmm.

And he decided to double down on the ridiculous "climate change" legislation of Arnie S.  What a mess.  Now we see the electricity rates going up fast and the "trade" part is just between power companies and polluting industries.  Fake money, created to satisfy econuts and charlatans.  But then we have his promise from the second run for Governor.  He said I will not allow a tax increase without the people of the state voting on it.  And what did he do?  He shoved an increase of 12-20 cents down our throsats.  God help the poor of the state.  Oh and the registrations of our cars are headed up as well.  Remember when they were huge yearly registration fees?  And mandatory insurance cards and smog tests and all that?  And the poor truckers get raped for thousands of dollars every year.  All that money was for roads.  And Jerry and the kids under the dome stole it.

They stole that and they stole all that redevelopment money the cities of California had saved to do things in their city.  And on and on.  Then when he was AG for California he refused along with Arnie, to defend Prop 8.  Now the people voted that in and yet the men we elected to enforce and defend the law chose not to do so.  And we made the man, the lawbreaker, and disrespecter of the Constitution, the Governor!  Now we see him letting thousands of felons out of jail.  Killers and muggers are now in your neighborhoods because he and the left refuse to build more prisons.  When you get mugged, raped or burgled, remember who let that happen.

So these are just a few of the outrages Jerry Brown has foisted on our state.  And hopefully, you all have had enough.  Time to show him and the kids under the dome in Sacramento who is in charge.  If the measure gets on the ballot I am still not sure the brain dead left who votes will even know what this is all about.  But I will remain hopeful.  Time to take back our state from these "sanctuary State/city" thugs and put the people of our state and federal system, citizens, ahead of illegal criminals and thugs.  Maybe Jerry and DeLeon will join MS13 in solidarity?
Posted by Todd Juvinall at 1:57 PM