LaMalfa Townhall notes and other ramblings

Well well, it was quite a day.  I volunteered to help set up the room for the Townhall and along with about twenty others, we did!  It took about an hour altogether and it looked great.  There were about 540 chairs and that filled about half the space.  So the rest of the space was standing room only.  After the setup was done we had about two hours left before the Townhall was to begin.  So I got to chat with some old friends and made some new ones.  I wore a red shirt, blue jeans and had my Trump theme hat.  Red, white and blue!  I looked forward to the meeting as truly these are what makes America great.  And different than other forms of government and representation.

From time to time I walked own to the entrance to the building and each time the line was longer of those awaiting entry.  Impressive!  And as we all know the people attending the Townhall were well schooled and had their playbook strategy for the day.  We know this because they printed it out and many of us read their playbook.  And we have seen it in other Townhalls across the country.  Today's Sacramento Bee has a couple of articles on this.  Reading them it is clear they have the same plans.  Marcos Breton, a Bee Trump hating "opinionator" was all over the Townhalls and highlighted the haters with glee in his writings.  He was so excited that some 61 year old Grandma from Placer County was helping organize the disruptions.  She was mad as McClintock said there were "anarchist's" at his Townhall an she took offense.  But the article failed to mention McClintock's overwhelming victory margins in his district, so one would be uninformed by Breton.  Of course the "haters" like Breton are so transparent he makes our claim of "fake news" real every time he yaps.  The leftwing Bee would never allow a "nice" story on a Republican and has shown its bias against McClintock all his political life.

The room ended up very full and most of those people were the contrived and schooled leftwingers.  They came prepared with "Agree" and Disagree" 8.5 by 11 color papers.  And some others had premade their favorite talking point paper as well.  Some dressed as walking signs like we see at football games.  Everyone was taking pictures and the press had a long side table.  Today the Union has a very accurate article on the meeting.  But when Mr. LaMalfa took the stage and announced that we would say the Pledge of Allegiance, the liberals booed.  But they calmed down for a moment and we said the Pledge without interruption.  They also booed the invocation done by a woman of faith. 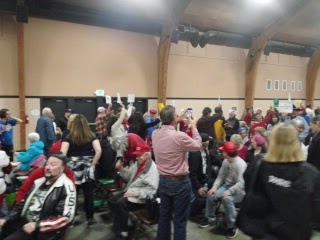 Then it began with one side of the room reserved for comments only and the other for questions.  The liberals were all about getting free stuff and they want higher taxes and more government controls.  Of course when LaMalfa answered he was screamed at by these lovelies.  A couple of them did try to shame those screamers by asking them about their manners.  Did not work though.  I would say there were 1200 people there and they certainly outnumbered us.  This is the reverse of 2010 when the Tea Party came to meetings, both Republican and democrat, and voiced their displeasure with the national debt and ObamaCare.  Republicans usually are not attending a meeting like this since the Representative is their party.  So nothing unusual to me about that difference in numbers.

A couple sitting right behind me was there for the Republican viewpoints.  They were dressed in red, white and blue and were not afraid to make known their support of LaMalfa and the Republican agenda.  I was proud of their courage.  Luckily for the audience, LaMalfa is very smart and knows how to deal with loudmouths and anti-free speech liberals.  He was nice but firm.  If you want to hear the answer you must quiet down and listen.  But most of his answers were drowned out by shouting nincompoops.  Sheriff deputies were there to keep the peace and it worked.  No one threw a chair (we ziptied them together) and no one rushed the stage and threw a punch.  Thank you Sheriff Royal and deputies!  All in all LaMalfa held on to his beliefs and that did not sit well with those wanting free stuff.  ObamaCare is imploding yet these fans of that mess could care less.  They want to double down actually.  One person said she got $200,000 in medical care for her illness but failed to thank the taxpayers for that!

I have been reading about other Townhalls across America (page 9A) and we see the pattern of the left.  They have their strategy and it really is not about our "free speech" but theirs.  Screaming, yelling and chanting really doesn't work when real problems need solving.  But the liberal media loves these people and you will see more of them in evry day's papers and news.  Not the same for the right however.  You would think Trump is illegitimate and should be tossed out of office.  The press write stories like today in the Bee by Food Rhee page E1.  He gleefully trashes Trump as going to be impeached or found treasonous for some Russian plots.  I read it and thought to myself, no wonder business people don't run for office.  These stupid journalists like Rhee see a successful person as one who must give up all they have done in their life so idiots like Rhee can feel better about some conflict of interest possibility?

Sadly, Rhee is a prime example of why alternative sources for news has come to be.  We cannot stomach these losers in the media trashing the people that are successful.  What has an idiot like Rhee done for America?  Nothing.  But it gave him a megaphone to be an ass.  And there are too many of them.  America rebelled against these people and their disrespect for us in the middle and on the right.  And many of the regular folks, hard working folks, on the democrat side  also voted for Trump.  Americans with a brain are going to the right.  We are sick of the left picking our pockets and then dispensing our money to things like "climate change" and transgender bathrooms.  Trump's budget proposals are a step in the right direction to regain sanity in American budgeting.  We can have a good environment and good jobs and proceed on to the future.  But the left thinks it  is a zero sum game.  If you allow people to control their lives you must be for pollution and worse.

America is truly divided. We have to really become aware of that or risk our demise.  We could lose the place in one generation.  Today, Venezuela, that socialist nirvana, has started arresting "bakers" of bread.  Why?  Because they were not using the government wheat flour.  And they were baking things people wanted such as croissants and donuts.  Not allowed in that country.  And that is what it will always come too.  These people that want free stuff don't get it.  And when their ox is gored, watch out, they will all become Republicans.