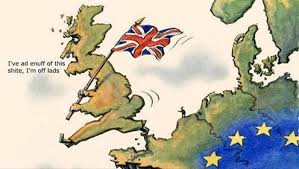 What a week eh?  LEAVE wins by over a million votes and now the world is shaking in their socks about the outcome and the future.  I think it is much ado about nothing except for the autonomy of the Brits.  They were fed up with the overbearing Federal setup and dictates of the EU and decided they were not going to take it anymore.  Kind of like our overreaching regulatory agencies from the Federal government here.  Of course our states are not going to withdraw from the USA but it should send some shivers down the spines of  those "One World" government enthusiasts.

As I watched the returns the other night, I was shocked by the commentary of the pundits in the media in England.  They are as corrupt as our media and just as biased.  A few days before the vote  there was a debate between the LEAVE and REMAIN leaders in Wimberley I believe.  Boris Johnson the former Mayor of London was on the LEAVE side.  A chubby gal from Scotland was the REMAIN leader.  She was very rude and tried her best to ridicule and talk over Johnson as he was at the podium.  Just like the liberals here in our country, if you disagree they do their best to shout you down so the folks can't hear.  Johnson did a fine job and it was probably very satisfying to him to see his sides victory.  He is now being considered as the Tory who may become the Prime Minister.  David Cameron the sitting PM has indicated his resignation as he was a REMAIN proponent and he lost.

So all this financial angst we see in the stock markets is worrying the power that be.  To me, it really is no big deal after what those big banks did to the middle class around the world in 2007.  I am more concerned about Main Street health and the middle class than I am about the big bankers and their proponents like Hillary Clinton and David Cameron.  Interestingly to me as I have watched  Prime Minister's Questions on Sunday nights on CSPAN is how the Tories under Cameron sounded more and more like the democrats of America.  The "conservative" party was not very conservative.  But maybe that is the only way to govern a country who gives all those freebies away.

I saw a couple of reasons why the LEAVE people won.  I am sure there is more but what stood out to me was, immigration and regulation.  The EU had become a huge over bearing bureaucracy and the Brits chafed under all the pronouncements from Brussels and the unelected bureaucrats.  It looked like a projection realized that was spelled out in the  the book, 1984.  I saw the vote as a retraction from "bigness".  The Brits wanted a government that was responsive to them rather than a system run by bureaucrats from elsewhere.  Pretty simple as I saw it.  Around the world the smaller the governmental unit the more responsive to the people.  That is why there are 190 plus nations now when there used to e a lot less.

So I say go Britain!  Get back on the self governing train and get those "ONE WORLD" proponents out of the place.

Journalism has really fallen on hard times as the people have decided it is a corrupt profession.  We see this in the reporting on things that Donald Trump says.  It has become really transparent and I think it has irreparably harmed the trust (if there ever was any) in the profession.  The reporters biases are everywhere.  Not only do they begrudgingly report anything negative about their favorite political candidates and causes, they deny the readers all the pertinent info when one of their favored groups has a problem or commits a heinous act.  Even today, the man who shot those homosexuals to death on Orlando is never described as a "brown" man.  And there is no discussion by the press about a "brown" man killing other "brown" people.  Why is that?  Well you have two protected classes by the press in the acts taken by Mateen.  The narrative is brown and black people cannot commit racist behaviors as they don't have the "power" whites have in America (and worldwide apparently). So no credible analysis takes place.  If a "white" man did this heinous killing, the narrative would be the racism and homophobic man and his picture would be in every story.  Not this one.  Sure the first few days there was a attempt to tell the truth but as the days passed we got to see more stories making the killer "human" .  Sympathy from the press for this killer ?

The PC press, trying to make us all feel sympathy for him and undercutting his motives even though his calls to 911 claiming allegiance to ISIL and Baghdadi were his and his alone.  That broke any credibility for the press.  Everyone can see the prejudice of the press.  They have their favorites. But the people said WHOA!  Wait a minute, we know the truth from the mouth of the killer.  What the heck are you pinheads writing sympathetic stories for?  But as usual, these "journalists" have a tin ear and really can't be diverted from their duty to protect their favorite classes.

It is time to reinstate "profiling" of people in my view.  Cops need a tool to help protect the rest of us from these killers.  Stop, question and frisk should be a national protocol that would be the best "gun control" method in America.  Get the guns out of the hands of the bad guys by focusing on them rather than the law abiding gun owners.  Simple. But democrats want to remove the Second Amendment protections while favoring others.  They have schizo tendencies.

Even in today's local Union Newspaper on Page A9 there was a tear jerker story on the Supreme Court's 4-4 vote on Obama's Executive Order on immigrants.  Illegal immigrants.  My goodness the tears were flowing from a women who was here 20 years and who needed a interpreter to talk to the "journalist".  She was fearful of deportation.  I can sympathize with her plight, but if she had at least tried to gain legal status in those twenty years and learned the English language, perhaps she would be OK.  Illegals are mostly good people and hard workers.  But the law is the law we are all told.  Especially by those hypocrite democrats.  Except though when it comes to potential voters for their party.  And it appears the Brits were fed up as well with people coming into their country and never assimilating.  If you want to come here from elsewhere, do it legally, learn the US Constitution and speak the language.  You will have a leg up in this crazy world as you become one of the "privileged" few as a American.  Otherwise, fly your flag across the border.   An American flag should be flown when you are protesting.  You all lose your creds when flying a foreign flag.  Pretty simple.

So America can learn a lot from the voting this week.  Many of the same issues are here that were discussed in Great Britain.  It appears Donald Trump is the only realist as to the outcome and what it means.  The democrats are simply in denial.  Their minority coalitions are not healthy as each stays autonomous with their narrow views.  Instead of them becoming a part of the whole of America, these groups stay apart except for voting.  They want their piece of the pie of the money paid into the pot by the makers of America.  This of course leads to turmoil, envy an finally violence.  We see that in the protestors at Trump rallies.  I have become fed up with the liberals/democrats dissing success.  They diss hard work and the diss profit.  They hate entrepreneurship and fail to recognize their "groups" would have no jobs if other risk taking people did not create those jobs.  A disconnect I have never understood.

Hugo Chavez did his best to destroy freedom in Venezuela with his "socialism" and we see the results.  No food, no toilet paper, no gasoline (even thought they have the greatest reserves on the planet).  And guess who is the richest Venezuelan?  Hugo Chavez's daughter!  Surprise, surprise.

People on the planet want what our people have worked hard to create.  If we do not protect our country from the evil doers, whether politically or from invasion, America will be a simple little forgotten experiment in freedom for the individual.  History books will probably say America gave it all up for Political Correctness and fear of being called racist.  What a sad eulogy that would be.
Posted by Todd Juvinall at 9:36 AM