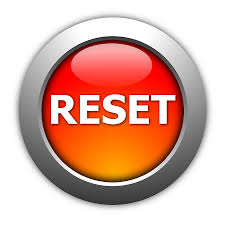 When Hillary Clinton went to Russia not long after becoming Secretary of State, she took that infamous "RESET" button with her (misspelling it in Russian and swiped from a jacuzzi).  She and President Obama thought it was cute I guess.  The RESET button was similar to the  advertising gimmick used by Staples called the "easy" button.  The "easy" button was Staples attempt to lure people into their stores to remake their relationship with their customers. America had a new President and he wanted to do the same with Russia.

In Obama and Clinton's case they really muffed it up and it looks like the two countries will not reset.  But why can't we do the same in America for Americans?  Let us do a "RESET" here.  America is morphing into a top down country run by government and every move we make is now something Americans must beg "permission" to do!  How can we fix this overreach?

Some people suggest Americans "just say no" to all this intrusion into our lives by these laws and regulations.  Some actually do "civil disobedience" to make government pay attention.  I say all the ways of returning the country to a bottom up form of governance should be on the table except violence of course.  But Americans for the most part are loathe to upset the apple cart.  With 93 million people of working age sitting around the hose eating bon-bons and not going to work, we are developing a huge dependent culture.  With educators dumbing down the kids of America (many don't know who Washington is) a ready made brainwashed generation of sheeple are being formed.  To what end?

I blame the politicians of America and it goes all the way from dog catcher to the President.  People want to "do" something when they get elected to office.  So they start passing "laws" and in most cases, they leave the "regulations" formation to the unelected bureaucrats.  Well, we all see the results.  Every American is now a "law-breaker" and should be arrested!  When you wake up in the morning you will break any number of "laws" during your day.  The government says you cannot do this or that and over time, millions of "laws" and regulations enforce that.  Jail and fines.  Red light cameras are the worst.  No policeman is required!

We have to RESET now or in my opinion we will lose the country.  Every day I see the politicians passing more encumbrances on the people.  Up until a few years ago Americans would figure out a way to outsmart the regulators.  But since these politicians and regulators spend 24/7 at their desks trying to ratchet down American ingenuity is it any wonder the country is in a malaise?  I recall the tragic fire at the South end of Lake Tahoe a few years ago.  I use it as an example of unintended consequences of government and its loathing to take responsibility for its inane rules.

The wildfire burned down over 250 houses and the fire destroyed all those "old growth" trees and made the place look like a moonscape, only black with soot.  The fire spread fast because laws in place did not allow people to rake up their own pine needles and other organic material.  All that fueled this disaster.  The resulting laws and rules by the politicians was to, in affect, punish homeowners!  And the politicians used this fire tragedy to infect the whole state with new "regulations" on building a home.  Rather than look at the cause of the fire and accept blame for stupid rules, the politicians forces all homes into a new "fire resistant" permit with hundreds of new rules!  Those new "rules" have stifled home building in California and forced many people top give up their dreams.  YOUR Money is no impediment to the rules!

I have advocated for many years a way to bring some sanity back into the process of creating laws.  It might be too late now but perhaps after a RESET America can try this.  When a law is proposed and it contains regulations, the politicians cannot allow it to proceed until they vote on the full bill.  What I mean is this.  They have an idea to regulate the new widget industry so they create a bill.  That bill cannot become law until all the proposed "regulations" are in place and then the politicians have to vote on it.  No more passing a feel good bill and leaving the "rules" up to the unelected bureaucrats.  This alone should bring sanity back into the process.

RESET may be painful for a while but change for the better is sometimes misunderstood by those favoring the status quo. California alone has close to 600 bureaucratic agencies with millions of people sitting behind desks thinking of how to pass more regulations.  They send out those "enforcers" to make sure a mining operation has no broken shovels or the hairdresser keeps those scissors in alcohol.  And if they don't they will write you up and fine you!  RESET needs to take place and we must restructure how we govern ourselves within the Republican form of government stated in the Constitution and the State's Constitutions.  If we don't we will rue the day we should have.

Lastly, we need to ban unions from government and revamp civil service.  People in fear of firing are what keeps people from becoming power mad.  It works in the private sector.  Unions have no place in a system that already protects them with "civil service".  Remove that and remove tenure for those educators and we may see a rebirth in America.  I think we will!

Posted by Todd Juvinall at 7:59 AM