Fracking under attack by democrats in the California legislature

I was watching a bit of testimony the other day on SB4 Pavley which is a massive regulatory law on the fracking of natural gas.  Now I am not an expert by any stretch on fracking, I think locally George Rebane and Russ Steele are, but I do know my gas bill at home is lower now and many people say fracking is the reason. Oh and HERE is a list of high paying jobs here in our state in gas and oil.

Here is a snippet of what caused the democrat tyrants of California the angst and desire to regulate.  It appears our loony federal court judges have done it again.  Ruling as follows:

"SAN FRANCISCO (AP) — Federal land managers violated a key environmental law when they auctioned off the rights to drill for oil and gas on 2,500 acres of prime public land in Monterey County, home to one of the largest deposits of shale oil in the nation, a judge ruled
U.S. Magistrate Judge Paul Grewal said in a ruling posted Sunday that the Bureau of Land Management should have conducted a comprehensive environmental review of the potential impacts caused by fracking before accepting bids for the drilling rights, in accordance with the National Environmental Policy Act."

So here is a perfect example of why America doesn't work well any more. The free market finds a way to produce more energy (even the left used to like natural gas), it becomes a success, many people prosper so the eco-nuts and their democrat legislative lackey's freak out.  They have to stop the success!  They use lies and hyperbole to denigrate the process, the energy source itself and GASP! Republicans!  They start the same old crap by demonizing "big oil", (whatever that is), and causing all sorts of fear about the fracking process.  Of course the process takes place hundreds if not thousands of feet below any water tables.  And other than the phony-baloney movie "Gasland", there has been no environmental catastrophes.

But as usual, the anti-capitalist left, eco's, democrats and anarchists, go after the process through legislation here in California.  SB4 is the newest attack on reasonably processed energy.  I listened to the numskull from LA, this Senator Pavley  and I have to say, the eco fools got a good puppet (among many).  Here is a process to extract a widely used energy and one that enables cheap costs to the poor and middle class homeowners, renters and industrial (job producing businesses) building owners, and these lovelies want to regulate it into oblivion! 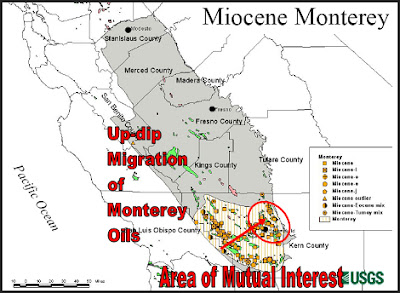 Monterey shale reserves are huge.  HERE is a bit of information about them and a map of their locations.

SB4 along with some other proposed bills would hamstring California's production of energy at a time of high unemployment and some of the highest living costs in America.  I guess I am unable to understand the lunacy of the California democrat and maybe never will.  Along with a bunch of Federal judges, most in need of a re-up on their jobs and oaths (don't male laws, boys and girls) we don't have a chance for common sense rearing its head in the Golden State.

Along with AB32 and thousands of other ridiculous laws and regulations passed by our kids under the dome, California will become the third world of the Pacific Rim pretty soon.  We can't seem to use our own resources and that will be our demise.
Posted by Todd Juvinall at 1:18 PM