Just got back this afternoon from a two day jaunt with my 84 year old mom.  She wanted to travel down to Coulterville and Greeley Hill.  Both old gold rush towns on Highway 49 south of Sonora.  I wanted her to be able to see the places she lived in 1941 when she was 12.

My mother was adopted when she was one year old by Grandmother Emily.  1930 was the year and Emily was 41 at the time.  When mom was 12 Emily took her to Coulterville/Greeley Hill and lived for a half year.  Mom attended a one room school house with grades one through eight.

I got to see the little schoolhouse.You have to imagine this little schoolhouse is way out in the boonies and the kids actually had to walk to it.  Through snow storms and rain storms.  We have it so good, all those yellow buses.

Mom wanted to see the house she lived in there so I drove up the road a ways past the school.  She finally pointed out the house which is now a garage!  Next to her old house is a real house she says was constructed (around 1841) by the man she says is her father, George Olney.


We spent the day driving around looking at her old haunts from her youth.  I could see the joy in her face as she recalled those days.  The area is very similar to Nevada County around Grass Valley and Nevada City.  Same kind of vegetation and topography.  It is easy to see the draw of the Sierra lifestyle, even back then.

So all in all, the towns along the Sierra's are very similar in architecture and layout.  Sonora' 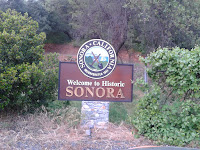 s main street is actually Highway 49, just as our two towns were before the freeway.  Sonora is a bit more doughty then Nevada City but it too is a tourist haven.  The outskirts of the town has been filled in by people wanting to live in the country, just as here.
So all in all my mom got a nice chauffeured drive and stay-over in her old stomping grounds.

We also went to the cemetery in Greeley Hill which is out of town a couple og miles towards Yosemite.  It is on a small hillside and like our local cemeteries the headstones date from 1849 to the present.  We located the Olney main headstone which has the name of who mom believes is her grandfather and grandmother Olney.  There is also a cousin buried next their graves and some small slabs of granite for four siblings.