While strolling through the news of the world I came across this little story about Chinese Premier Hu and his attendance at the 15th Anniversary of Britain turning over Hong Kong to the communists.  It peaked my interest since I have always wondered who the brave man was that stopped the tank column in the Square during the peaceful democracy attempt in 1989 was.

HERE is the story of the detention of a reporter for simply asking about the that day in 1989.  He actually shouted it out from behind a barrier used to keep people away from the "leaders". 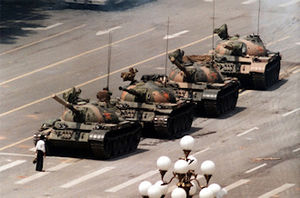 HERE is the Wiki on "Tankman".

It appears to me the incident suppressed by the Chi-coms with terrible brutality and murder is still unresolved by many Chinese people.  What happened to that brave man?  Why hasn't the Hague and/or the World Court pursued this?  Hell, 23 years and we still don't have any information!  Why doesn't Obama ask Hu where this man is?  He is a symbol for freedom and bravery for all people.  Compare "tankman" to the scofflaws of the Occupy bowel movement.  They wanted free Iphones, "tankman" simply wanted freedom.  He gave up his life (he has never been seen again or identified) while the OWS were raping and destroying others property.

As we struggle with the meaning of our own Constitution and the reach of it into our daily lives, we have to remember "tankman" and what he symbolized.  We cannot allow the government to do to us what the Chi-coms did to the thousands of murdered people, mostly the young and educated, in the Square those two fateful days.  If we allow the slow chipping away of our individual rights, the rights we hold so dear, then we will deserve the fate of "tankman".  Thank goodness there are people in America willing to do their best to slow down the government intrusions.

Though nothing we do here compares to the bravery of this unknown man in Tienanmen Square we must stay vigilant.  If we allow laws like Obamacare to stand for instance (and EPA tyranny) we allow the memory and bravery of the "tankman" to be lost.  Over time, like a dripping water droplet, the hole in the rock of our freedoms will be created.  The "tankman" is my symbol of ultimate freedom and bravery by an individual willing to sacrifice all for the very things we take for granted here.  Do not forget this man.

The reporter in Hong Kong after 23 years asked the right question and still the tyrants of his country will not answer.  Maybe someday they will before they kill off all those wishing the truth.

UPDATE: Friday May 30, 2014
I was watching CSPAN this morning and the House Sub Committee on Foreign Affairs was listening to a panel of men from China.  The crawl at the bottom of the screen said these men were activists and were testifying on the massacre of people in the Square 25 years ago on June 4.  I had hoped that the "tank man" would have been finally recognized but it was not to be.  That brave man was probably long ago murdered by our biggest "trading partner" as were many other brave Chinese people who only wanted freedom.

The testimony from a fellow who was there in the square and who became a leading activist against the communist government, Zhou Fengsuo, was very informative.  He has lived a life of harassment and jail for simply trying to tell the truth about the massacre.

Another man, Chen Qinglin, spoke through a translator to the Committee.  He spoke of constant harassment since the massacre and the squashing of all information still going on to this day.  He was a Professor who became a activist.  Threatened constantly, he still has the courage to speak the truth.  Check CSPAN for the video and listen to these brave people.  When I read local liberal blogs complaining about the "good ol'  boys".  I can only laugh at the author of that ridiculous phrase.  He should move to China if he wants to experience true tyranny of the freedoms we all have here.  But people like that are just chickens.  Hiding under the laws many people here gave their lives to protect.
Posted by Todd Juvinall at 8:06 AM