Thanksgiving, Communism to Capitalism in 1623 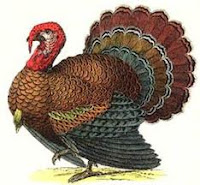 The Sunday Appeal-Democrat out of Yuba City-Marysville has a column called "Bruce's History Lesson" and it was a reminder of America's dallying with what some would call communism back in the beginning.  Now I am not personally saying it is correct that Bruce would call the Pilgrims system of governance in the beginning as "communism" but after reading his column I might change my mind.  You know, the duck thing. It had to do with the idea that "self interest" is a basic human instinct.

Bruce quotes from Federalist 10 done 167 years after the first Thanksgiving because James Madison spelled out the concept trying to convince Americans to support the new Constitution.  Using the example of the Pilgrims and their attempt to live under a communal system where everyone got an equal share even though an equal effort to create the "share" was not demanded, almost proved fatal to them.  The 1621 feast was only possible because the Indian, Squanto knew English and was able to teach the Pilgrims about corn.  The Pilgrims were so thankful, that, well, you know the rest.

In 1623 the leader of the Pilgrims, William Bradford had what Bruce calls, an epiphany, and decided to scrap the communal ownership of land and the equality of results and efforts and allowed the distribution of the land for private ownership.  Well, it wasn't long before things became very capitalistic and the hard working Pilgrims were growing and harvesting at record levels and the scofflaws who sat on their butts got real hungry.  It wasn't long before the lazy ones figured it out.  They had to help, you know, work, for their porridge.  So the roots of capitalism were born from that "self interest" spoken to so well by Madison.

That seems to me to be the message lost in a lot of the industrialized countries and here in the USA these days.  If the "Occupy Wall Street" scofflaws were sent out to pick those apples and artichokes if they desired to eat, perhaps there would be a better understanding of the real meaning of "self interest" and personal and community success.  The OWS and socialists in general, along with the communists, want an equal outcome even though they put nothing into the front end of the process.   What is it these people are thankful for?  Like the early Pilgrims, these OWS folks sit in their tents counting the money garnered from the "free" money from the programs passed into law to make all things "equal".

Well, the OWS are failing to convince the rest of America in their cause.  Americans for the most part know you have to work hard, do your best and take responsibility for your own life.  Sure, Americans will help when you are down, we are the greatest at helping others the world has ever seen, our country is the national version of Mother Teresa for goodness sakes.  What we don't countenance is a bunch of whiny freeloaders who come across as total ingrates.  Unlike the Tea Party, which is composed of hardworking people, the OWS has no legs.  Americans will celebrate this Thanksgiving on Thursday and be grateful they live in such a wonderful place.  So wonderful that a mob of ingrates in Zuccoti Park, Berkeley, Santa Cruz and a few in Sacramento, can head down to the shelter and get a free turkey dinner manned and paid for by those terrible "self interested" American volunteers.
Posted by Todd Juvinall at 8:04 AM