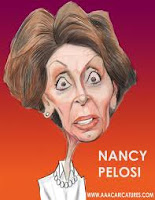 When they get caught with their pants down, oops, their dress down, making money on non public information while pending legislation is in front of them, Congress people deny deny deny.  In a scathing new book, Author Peter Schweizer exposes both sides of the aisle in Washington DC and takes them to task.
HERE is the article. It seems Pelosi, while Speaker of the House, third in line to the Presidency, was buying up a whole bunch of VISA stock while a major credit card industry bill was in front of her.  Of course she says there was no connection with her portfolio and the bill.  Yeah right, and as she says, she has been unfairly treated by that "right wing" smear machine, 60 Minutes.

What is sad about people like Pelosi and the rest of the people that did, do or will do, this kind of thing is their disregard for the trust we give them as our representatives.  Especially Pelosi since she was a self proclaimed "progressive" person.  Aren't they supposed to care for all the little people?  The children?  Well, maybe not when it comes to "insider" trading.  The little people didn't have the same information, did they? Oh, and it is alleged John Kerry made 3 million bucks too.

Apparently what she did is prosecutable under the SEC rules but we know she will never even be brought before the House Ethics Committee, don't we?  Heck, Herman Cain gets reamed by the lamestream media for calling her "Princess Pelosi" for goodness sakes!  Well, it looks like Cain was right, she was a princess, a member of the "ruling class" and immune from the same rules we are all under.  So who gets the last word on this?  It used to be these things were punished by the voters of the district booting the scofflaws out of office.  That only happens now if it is a "sexual" offense.  Insider trading will go over to the side of the ledger now as simply, one of the things the people really don't care about and as long as she is for Obamacare and abortion Pelosi will never leave under a cloud.  What a sad thing in our governance.
Posted by Todd Juvinall at 6:32 AM