John Wayne Gacy, a Good Democrat and the Lamestream Media is Corrupt

Michelle Bachmann known for verbal gaffes, like Vice President Biden, said she thought John Wayne was from Waterloo, Iowa and he actually came from Winterset Iowa.  So, as usual, the lamestream media went with a slime from the left and somehow claimed she confused John Wayne with John Wayne Gacy, the notorious murdering homosexual of many young boys and men.  I said to myself WHAT!   Here is the video and you really have to stretch credulity to say she confused the scumbag John Wayne Gacy and John Wayne.  This just proves to me the scumbag press hates conservatives so much they have to do this kind of stuff.  John Wayne,  Wayne is his astl name, not his middle name.  Gacy has a middle name of Wayne.  How the heck did they com up with this anyway.  Well, just another piece of evidence that the lamestream press cannot be believed.

I thought the press couldn't get any lower but they sure can.  Here is a picture of that JWG good democrat shaking hands with Rosalind Carter.  I want to see the press use this photo and explain to all Americans how this came about and compare it with a made up press gaff about our cinematic hero, John Wayne. 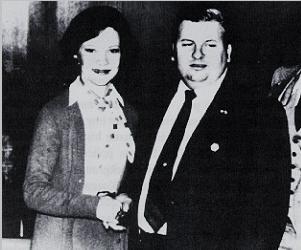 Posted by Todd Juvinall at 3:45 PM