Don't be a leftwing lemming!! 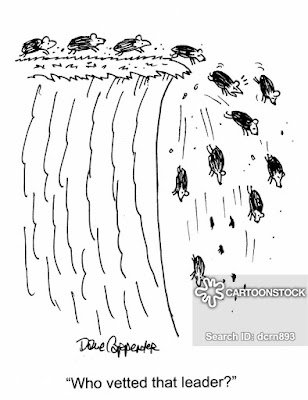 Like most humans and animals, we avoid death as best we can.  We all hope it won't hurt when our time is up.  It is built into our DNA to survive and do our best to avoid something no one ever came back from.  Well except for Jesus Christ anyway.  So we stay away from things that might kill us and so far the human race has been the best at that avoidance.  There are seven-plus billion of us on this planet.  If only one-tenth of one percent die every day that number would be what seven million?  That is a lot of people to turn into ash or bury in the ground.  And we all grieve for the people we know and hold dear.  That is a lot of grieving.

The planet has seen many "pandemics" and lesser "epidemics" since the beginning of time.  But the planet has had only one "baby boomer" group and they sure don't want to die.  Heck, they don't even want to get old.  But until some scientist unlocks the DNA strand that causes old age, we will all get old and die.  And we die from many things and a lot of the reasons are self-destructive.  Alcohol and drugs, overeating, and obesity.  People take risks all the time.  Some jump off of tall buildings or mountainsides.  Some climb rock faces without a rope.  William Tell shot an apple off his son's head with a bow and arrow!  And of course, we have seen throughout time the genocide perpetrated on others less powerful.  Genghis Khan killed millions and stacked their heads at the city gates.  No quarter given the people he conquered unless they pledged their lives to him.  And there have been many tyrants with armies.

In World War Two a hundred million died at the hands of fascists and communists.  It took the bravery of people not afraid to defend freedom to defeat those tyrants.  All the while humans warred on each other, little bacteria and viruses killed more millions.  The Panama Canal would never have been built if General Walter Reed had not eradicated the breeding grounds of the mosquito carrying the virus.  Millions died from bubonic plague in Europe until they figured out that rats carrying fleas were the vectors.  And of course, polio and many other diseases were cured as humans created vaccines.

Billions of we humans have come and gone and the course of history has changed many times because of disease and war.  And we are still here!  But now we see a different point of view from humans afraid to meet their maker.  I am not crazy about croaking either, but I have hope that my faith will keep me strong and less afraid of death than if I had none.  Heck, I could go out to the store for milk and get run over by some drunk or careless driver.  We sit in a weapon of two tons when we drive and a small deviation of our attention can lead to a disaster.  Many Americans die in terrible vehicle crashes.  But today we have this virus from Wuhan China and it has made the planet's people so afraid they cower in their homes.  And tyrants we call Governors are exploiting the virus claiming it is so bad they must be obeyed as if they are mom or dad.

The virus has been exploited by the left for political purposes as well.  We see the democrats passage of a three trillion-dollar bill and it contains every leftwing "wish" to turn America into a socialist country.  It will die a justified death in the Senate but imagine if the Senate was democrat and we had a democrat as President!  My goodness, these tyrants tell us "never let a crisis go to waste" and we see it up close now.  Why these people want to take the virus and use it to control us is something I cannot fathom.  But it is true.  There are people in high places that want to control you and me.  They cannot stand it.  We are free and don't want to be told what to do by C minus students.  I call them that do, lemmings.  They can't seem to proceed in life without being ordered.  I am not like that.  I am an adult and am a cautious man.  I know how to survive and so do most others.  We are careful and look out for others.  The lemmings don't.  They can and do accept being told how to lead their lives and do so without question.  They even criticize those that lead their lives through their own common sense and hard work.

We see the left criticize those Americans that want to open their businesses.  These business owners closed to do their part to slow and eradicate the virus.  But the tyrants have changed the "goalposts" and now these business owners say FOUL!  And so they are rebelling against the tyrants and trying to reopen. These tyrants think that "dry beach sand" needs to be avoided!  Only step on the wet sand.  And that is if they allow people on the beaches!  The virus lasts a few seconds in the sunshine and fresh air.  But the tyrants don't want to lose their power.  So unless you obey you face arrest or loss of your license.

So be reasonable but in America, we can disobey just as we have been schooled by our Constitution.  Remember civil disobedience was faith by the left when they were not as hypocritical as they are today.