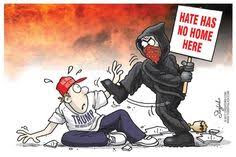 I have volunteered at the Republican booth at the Nevada County California Fair for 35 years.  I was young when I started and now I am 69.  Every year on Friday and Saturday nights we see hundreds of people and chat with many.  We hand out bumper stickers and we register people to vote.  We field questions about candidates if there is an election coming up.  Overall everyone is nice and it is a pleasant experience.  But sometimes it isn't.

This Saturday on the 6-10 shift we three, Joe and Sheila and I, were having a great time selling Trump 2020 hats and T-shirts and fielding questions about the District Assembly candidates.  Almost at the end of the shift, a woman came up and engaged Sheila.  We have a Donald and Melania cardboard lifesized cutout as well as a Mike Pence.  This woman started right in demeaning the President.  She was using vile terms and personal insults about Trump and we all listened for a couple minutes.  She said he oozed fat and was fat and ugly and a scumbag, well you get the idea.  Nothing about him was out of bounds.  Well then Joe started folding the cardboard models to put them away and I looked over to see him starting to fold Melani's likeness.  Well, of course, she is a beautiful woman and I said: "Wow, look at those beautiful legs".  Instantly this woman screamed out "You triggered me"!

For the next few minutes, she screamed the most vile profanity at me because she said she is sick of the patriarchal society and she was once abused.  All this after she slammed everything she could about Trump.  I said would you please leave as there are young people and others here that don't care to hear your profanity.  She of course told to F myself and she refused to leave.   At this point Sheila, a very patient and intelligent woman who knows her issues and facts decided to try and calm this crazy person down.  So finally this woman stopped screaming and Sheila took her aside for a few minutes.  Well, 30 minutes.  And they had a back and forth on issues which I overheard.  This woman had every leftwing and socialist talking point down.  But Sheila knows her stuff and she did her best to counter all the idiocy this woman was spewing.  Later this woman said she was a professor at Stanford in the "Climate Change" department.

I never got her name but we are trying to see if it is true by checking Stanford's website on this department.  We were shocked that someone so unhinged would be teaching our kids!  This person was spewing all of Bernie Sanders, Obama and even Antifa BS we have all heard this year.  And supposedly she is a teacher!  What really was amazing to me is how brainwashed a lefty is.  She spewed her stuff and it is 180 degrees off of what I know and believe.  But mainly it was her narcissism that allowed her to scream profanities at people she doesn't even know.  I have got the finger and invectives for wearing my MAGA cap and it seems to be the women that are the worst.  Guys know if they screamed at someone they might get a fistful of knuckles.  But these liberal women screaming this crap are immune as we men of the right have a different sense of what to do when challenged.

Overall we had a great time and were very successful.  We re-registered many democrats to become Republicans.  And the common thread was they cannot abide by the far-left agenda and anti-American stance of their candidates and leaders.  We, of course, we're happy to help them change party.  And those Trump KAG and MAGA hats and shirts sold like hotcakes.  I praise the hard work of Bob Hren, Chairman of the NCRCC.  He is smart and a very hard worker.  The Committee should keep that fellow he is valuable.

GO TRUMP 2020 and let' select more Republicans at all levels of office.  Take back America from the loons of the left and democrat party.
Posted by Todd Juvinall at 12:27 PM