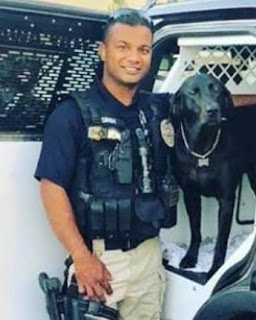 We have a mess in California and most of the rest of the country.  Half of our population has somehow conflated illegal aliens with legal immigrants.  I understand why the left has done this.  It makes it a softer view of those that sneak into the country and confuses the less than bright Americans of the left.  This must end and I suggest the schools of America start teaching what the words "legal" and "Illegal" mean.  This morning the service for Officer Singh is on only one station/network, FOX.  The others could not be bothered to honor this "legal" immigrant.  Instead, we are inundated with stories about the illegals and how they are being treated by this country.

In fact an article in the SacBee today failed to mention the status of the killer of Officer Singh as the thrice deported illegal alien he is.  The author of the article waited until well into the story to have President Trump tell the readers the killer was illegal.  Journalistic malpractice but sneaky enough that most people would not figure out the bias.  Thousands of police officers and others are at this moment paying their respects to this brave man.  Officer Singh leaves a wife and five-month-old son.   The Police Chief of Newman, California announced the service dog will be given to them.

In another story in the Bee the State announced it still doesn't know how many illegal aliens voted in the last election.  How can that be?  If the Russian were manipulating the voter rolls why would they enable all those illegals to cast votes?  Hell, maybe the democrats did that.  California has an estimated 4 million illegals and we see how that has turned the state into a democrat stronghold for the foreseeable future.  The working and middle-class folks are leaving and all these illegal are coming in to fill the vacuum.  A ready source of democrat voters.  And we see the results.  Homeless people everywhere.  Trash and feces everywhere.  The people coming here are not driven by the "puritan" lifestyles of order and clean society and environment.  And the democrat politicians seem to care less about the state becoming a big trash pile and an outdoor toilet.  More important to have "transgenderism" and bathrooms for people confused if they are a man or a woman or something else.

Officer Singh was a policeman.  He was someone well respected and liked by all that knew him.  He was murdered by someone that was not supposed to be in America.  Yet today, the democrat party will not help their own country curtail the illegals from entering here by approving money for a "wall".  Somehow these lovelies of the left try to convince us that a "wall" does not work.  Say what?  We see the help all around us.  It is common sense.  But don't believe your lying eyes the left and the democrats tell us.  They say walls don't work.  Yet most of them live inside a wall and they even lock their doors on their houses.  I guess this is all political.  Deny a victory for the President and make those looney tune voters of the left happy.  Maybe we need a mental illness check on all democrat voters.  Seems they are committing a felony of stupidity to me.

The Supreme Court is taking up two "gerrymandering" case in this upcoming session.  One from North Carolina and one from Maryland.  In my opinion, the courts have nothing to say about the drawing of districts as that is spoken to directly in the Constitution as a State Legislatures duty.  But of course, everything is sued and placed into the court system.  And the tyranny of the black robes, the unelected member of the government, are supposedly the final arbiters of everything.  Well not in my opinion.  We need to take back the courts and have ironclad rules about what can be adjudicated.  And if a precedent was as important as we here Senators say it is in confirmation hearings for Judges, then how come it is not used in court cases today?  Hell, every case cannot be that different from previous ones.  But it seems no matter how many times a case is heard it will be back again.  That is ridiculous.

America is divided because the left has lost its mind.  The right is filled with millions of people like me that simply want to be left alone.  Yet the governments at every level are not listening.  California alone passed over 1,000 new laws in 2018!  Every one to ratchet down our rights and make more work for their fellow attorneys.  Jerry Brown signed over 17,000 laws as governor over his sixteen years.  Is the state better off?  Is your life better?  I say sunset every law if they prove to not work.  But that won't happen.  So even the laws that should work in this state don't as the Legislature has made our state a "sanctuary state".  And that is all you need to know about the murder of Officer Singh.