Democrat slime tactics should be rejected! 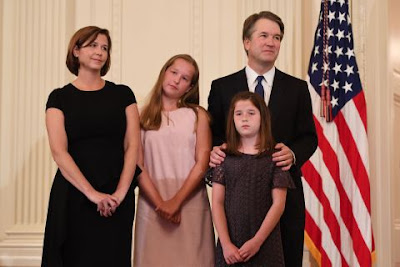 If you are not worried that the very people we elect as our lawmakers have become unhinged anarchists, then you are not paying attention.  This kerfuffle about Brett Kavanaugh and his conformation to the Supreme Court is a watershed moment.  Similar to the slimes that tried to derail Clarence Thomas many years ago, this attack on a good man is way over the top.  I have watched this every day and read and watched the reporting and it is shameful.

Apparently, all the media needs are some lunatics declaring a person did something 35 years ago and without proof the media will run it and smear the alleged perp.  No trial, nothing to see here, move along.  There does not have to be any proof.  In fact, the people this Ford woman says were in the room deny it!  Yet even this does not phase the media and the loons on the left.  The allegation is enough!  That was how it worked in banana republics not the USA we say.  But to those trying to deny a good man his position they will stop at nothing to run him out of town and ruin him personally

The reason I see this as a kangaroo court and a pack of lies is it happened to me when I was a elected official.  Even before I won the position the left of our little county was doing their nasty deeds.  In my case I decided that I would not respond as many already knew me and they were unconvinced the lies had merit.  And I won twice against this kind of smear.  But Kavanaugh is facing more than I ever did.  Millionaires and billionaires of the left are spending money to buy these lies.  I wonder how many mortgages will get paid as thanks for the sacrifice?

America should be better than this.  We need to shun those that push guilty until proven innocent.  Hell, Ms. Ford wants Kavanagh to testify before her allegations are heard under oath!  Say what?  And she does not want to have a lawyer grill her.  She and the democrats think the fact a bunch of white, older male Senators are enough to toss the public into their camp.  I say this tactic will fail as we have seen the Chairman, Charles Grassley, bend over backwards for this woman.  And still she is a possible "no-show" to the hearing.  And now she says she doesn't fly so that could delay her arrival.  But she has been to Hawaii for work in the past so that sounds hollow to me.  Just delays.  I think she may be a no-show.

This confirmation become a three-ring circus and the clowns are the democrats.  The Republicans have stayed above the low fray and look like the adults they are.  The democrats are simply desperate.  Does America want to be run by these democrat clowns?  I hope not.  And if you are a victim of something are you unable to forgive?  And why blame every man or perp group for your issue?  My goodness if you were robbed by a Samoan does that mean you have to hate every Samoan?  Of course not.  But that is what the democrats want.  Hawaii's Senator Minnie Hirono says all you men need to shut up and believe the woman.  She is telling the truth and all you men are liars.  Wow!

So hopefully the right-thinking American voters will reject these loons of the left and toss their hate into the trash.  We need people that think and not a bunch of lemmings who call everyone who do not agree with them, some sort of goon.