Free Speech only for Leftwing Thugs? 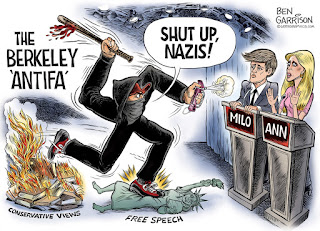 Watching the confirmation hearing for Brett Kavanaugh for the Supreme Court is quite the lesson in free speech and manners in general.  America is so concerned about the rights of those we disagree with that we give great latitude to people's "rights" to exercise their free speech.  So the leftwing extremists have taken it to the edge of common sense and manners and we all get to see that lunacy in these hearings.

I have watched and have been the target of that kind of behavior for many years and know it is a fine line between acceptance and going too far in the discourse between people.  Many times I have been verbally attacked and called all kinds of denigrating names by extremists leftists and all because I spoke my mind.  My strategy has been I start out discussing the issue with comments relative to the issue.  And as usual, if it is a controversial issue that is discerned as partisan, the left-wing attacks and tries to shut me or others down.  I then counter-attack.

As a County Supervisor I experienced these things for the first time and in the beginning, I did not know how to deal with these attacks.  I am all for free speech and did my best to simply debate the issues.  But the left was all about shutting the debate down and running the person out of town.  They not only attacked me personally but my family and relatives.  They tried to shut down my business.  And all because they could not debate with a counter-argument.  I dealt with this for the eight years I was a Supervisor.  After I left the Board I created CABPRO in 1993 as a way to keep a voice in local to federal issues.  I had by then become prepared for the attacks and they sure came.  I opposed the Wild and Scenic proposals of the left and the policies of the Forest Service and BLM that were forcing people out of the loop of decision making.

And wow!  I got attacked relentlessly at meetings and in the newspaper.  I was attacked in a book by an academic from Oregon and later by people trying to shut down an application to a mine on San Juan Ridge.  Later the BLM was trying to place an illegal overlay on property on the Ridge to stop a mine from opening.  And I debated many times these issues and withstood the attacks by the proponents of these issues.  But to me it was still important to maintain "free speech" and I never tried to shut the opposition up of down.  I tried to maintain composure and debate intelligently about the issue and do it with the facts.

Once I was debating three people on the issue of an overlay on property on the San Juan Ridge.  It seemed it always took three to four people to debate little old me.  The BLM handbook was in my hands as I debated their Cheif on KNCO.  He denied he was doing anything that was disallowed in his handbook.  I then quoted from the handbook that said he was.  He called me a liar!  Same with a man from the Cement Hill area about a flyer he circulated to the homeowners in his Association.  I had his flyer in my hands and quoted his words about the issue.  He called me a liar!  I learned a lot then about the left wing people.  They call anyone they disagree with a liar, even when being quoted from their own documents.

Moving forward to this era, things have gotten much worse.  The latest is the election of Donald Trump.  Yesterday we all got to see a travesty of our "free press" hen the New York Times published an "Anonymous" Editorial on Trump!  And of course, there is no way to confirm, anything in the screed.  My experience tells me if someone is gutless about using their name that the information they purport to have is not credible.  So I disregard it.  And that is what I see today on this NYT Editorial.  No one believes it so it is simply regarded as a "fairy tale".  It does show us all that the opposition has no compunction about using things they think to help their cause.  Lies and force are now common on the left.

I attended two "free speech" rallies in early 2017 in Berkeley.  That is when the new "brownshirts" of the left, the "Antifa" or anti-fascists, showed America what they are all about.  Violence and thuggery.  I saw many people at the rally get pepper sprayed.  Simply for reading out loud the Constitution of the United States!  I saw people get smashed in the face or back for simply standing there listening to people speak about free speech!  I saw the police stand there.  Apparently, they had orders from the Mayor to let the thugs alone.  I had a MAGA cap on and I got numerous middle finger salutes.  Of course, I consider that an acknowledgment I am Number One!

And now we see a total disrespect for the President and anyone else that has a conservative point of view.  Instead of debate, these lefty democrats shout down those they disagree with.  They keep people from even speaking and get others dis-invited to a debate or forum.  This is a cowards strategy in my view.  America has been great because we could debate things and discuss them rationally and then in elections vote for someone reflecting out positions.  But we see that is now disregarded by the left.  They want to "impeach" Trump.  They don't believe a word he says and we see a phony investigation into "Russian collusion" and other things trying to undermine his administration.  And the opposition has become even more shrill and aggressive.  We see that in the Kavanaugh hearing.

I see the desperation of the left and their mouthpieces we call the "media" and the NYT Editorial is the latest example.  When spoiled brats don't get their way this is how they act.  And the democrats are no better than a 10-year-old child in their strategy to win back the reins of power.  They are even attempting to elect people we call socialists!  That is a strategy I hope they keep up.  America fought socialism in the form of communism for 70 years and finally vanquished it from the planet.  Well except for a couple of places and we see what has happened to Venezuela and Cuba.  But the democrat party thinks this is a winning strategy.  I say go for it.  Let's debate it.

America is in turmoil but to me, it is contrived by the left who likes thuggery to get its way. We on the right lived eight years of Obama and the worst people did against him was a rally by old people called the Tea Party.  They left the parks cleaner than when they arrived.  The lefty groups trash and burn and beat people up now and for some reason, the press gives them a pass.  Maybe a paragraph or two for one day.  I recall the press excoriating the Tea Party for allegedly spitting on some black Congressmen as they crossed the lawn to deliver the ObamaCare bill.  Day after day it was reported.  But it was a lie and the corrections were hard to find.

If we cannot have decent discourse with thuggery we are not going to be around very long as a free country.  We will revert to what the planet has seen before America ever existed.  A few people in charge, no laws except the KING and violence all the time.  I ask Americans to have some respect for the Constitution and its provisions and stop the thuggery by the left.
Posted by Todd Juvinall at 9:28 AM