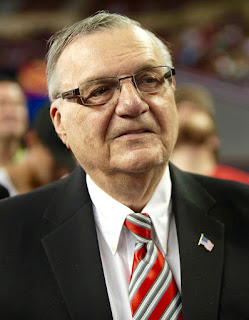 Joe Arpaio needs a break.  In my view a rogue Clinton Judge has found him guilty of looking out for America and that Judge would have none of that.  Why has all this happened?  Because this is what the left has tried to do for many years and they finally got a bogus charge issued by the Obama Administration's AG, Loretta Lynch to do it.  The same babe that met "slick willy" on her jet in Phoenix and discussed how Bill wanted a repayment of Lynch's appointment under him.  And that favor was a James Comey punt on the Hillary email fiasco.  Remember that?  She had a private illegal server in her basement and used it for her State Department work.  The FBI said it was probably hacked by bad players and then she admitted to cleaning it with BleachBit to remove 33,000 emails.

That is the story of the corrupt Lynch who had the audacity of filing charges against a good man.  Sheriff Joe worked all his life to make America safe and his repayment by scumbag liberals is jail time for doing his job.  Illegals have more rights than he.  So we all get to see the travesty of law when a liberal is interpreting it.  So I hope President Trump BleachBit the stupid decision of that  Judge and lets Joe, now in his 80's off and out and remove the liberal scum's stain on his record.  Then impeach that Judge who thinks it is more important to let illegal alien criminals roam our country while putting the law abiding Sheriff Joe in the slammer.

HERE is a more intense article.
Posted by Todd Juvinall at 5:06 PM