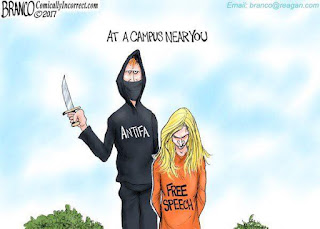 The Antifa thugs have been in the news a lot lately.  (notice their flag looks like ISIS' flag) I got to see them up close in Berkeley, twice.  They are skinny white boys, probably cowards without their face coverings and they are aggressive and armed with weapons.  Sort of like a mob mentality in my opinion.  When a mob gets going the sheep follow and do things they would never do alone or in the light.  But that is Antifa.  Thugs without borders.  What are they?

It looks to me these thugs are leftwing anarchists and communists.  Socialists and malcontents.  Many have just emerged from their momma's basements to become "somebody".  Like Marlon Brando in "On the Waterfront" they could have been a contender.  Well maybe in diaper repairs.  But as far as having anything of value to say, they don't.  I watched them attack people in Berkeley who were simply speaking the words of the Constitution.  And those speakers were black, white, brown and more.  Antifa just wants chaos and they get it.

They have spread out across America and show up at most Free Speech rallies.  They find out where conservatives are going to gather and make their way there to attack.  Last weekend they attacked peaceful men and women in Berkeley again.  A lot of that was videoed.  I watched some and others were telecast on major news programs.  I said FINALLY!  The major news was disregarding these anarchists and were doing so in my view as they are simpatico with them.  Only FOX spent some quality time assessing the antifa rioters.  And today I watched an INFOWARS video taken this week in Austin Texas as Trump was landing to help.  The host asked every single "protester" why they were carrying signs pushing for Trump's impeachment what he did to get impeached.  Not one had an answer.

Ironically the only person not yelling obsenities at the host was a lone antifa white kid.  No mask on so maybe that is why he had tempered answers.  But his information was incorrect and I could see why, believeing the lies, he would wanyt to impeach.  Maybe if he heard the truth he might change his mind?  Probably not.  But the Infowars guy and his cameraman were under verbal assault by these leftwingnuts.  Even a couple of older women attacked them with the finger and vile profanity.  And all for asking a question.  That seems to be the extent of the intelligence of these people.  Low at best.  And their language!  WOW!

Same in Berkeley last weekend.  The peaceful men and women held their hands up to show they were not armed but that did not deter the antifa thugs from pepper spraying them and knocking then to the ground.  As these peaceful men worked their way towards the police line they were assaulted numerous times.  When they finally got to the line, the police handcuffed them!  Amazing.  Yet now we see the Mayor of Berkeley saying he is against the antifa thugs.

But he wants to simply call them a "gang"  Sure.  The man is a part of another thuggish group called "By Any Means Necessary".  Known for their own thuggery.  It looked to me the police were told to stand down so their usefulness for protecting the peaceful people was non-existent.  Of course Congresswoman Barbara Lee who represents this area is the only avowed communist in the House of Representatives.  So it is of no surprise all these folks would be anti-American, pro-communists.

But now the thuggery of these groups from the left is too much to overlook by their pals in the lamestream media.  We are starting to see them begrudgingly allow video and stories to be be shown.  And as they do the outrage of the America peoiple is increasing against these thugs.  We cherish our "rights" and love freedom of speech and expression.  Though the leftwing placed a Jesus Christ cross in urine and calls it art, we did not come rip it down and beat them up.  But try to read the First Amendment in a park in most any American college campus or park and these thugs from the left show up to cause havoc and violence.

Americans don't really care for these left-wing extremists.  They create disorder and we like our country's  predictability.  We like law and order and fairness.  We seem to have little patience for these lawless types.  And now I sense there is a change coming.  Maybe we can go to Berkeley and see Milo and Coulter without these creeps pepper spraying us.  Or starting riots and trying to burn down the venue.  Just maybe all this exposure we have brought forth along with FOX and others on the radio are making Americans see the folly of these thugs.  Just maybe!