Liberal apologists are on the job 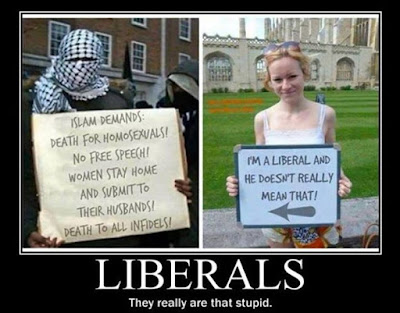 Is it any wonder we saw a sea change in the election of Donald Trump?  A man who tells us he will protect us as best he can?  Saturday he made a statement from the Ford Theater on the latest vile attack on people by Islamic terrorists in London.  Of course he said these very things during the election campaign while Hillary Clinton and Bernie Sanders wanted to "dialog" with those terrorists.  People know the difference.

But we seem to have a slice of America that thinks playing patty-cake with the killers is all we need to get along.  If we are "nice" to them, don't call them what they are they will leave us alone.  Well, we have seen this tactic fail repeatedly in Europe and elsewhere.  The first time I saw this failure was in Bali, Indonesia.  It was a favorite tourist destination and the people living there were peaceful and welcoming.  The terrorists attacked and murdered 202 people with bombs and other tools of death. Most of the dead were from Australia.  And we all got to see the indiscriminate murder of innocents.

But even after the downing of our Twin Towers in 2001 the left made excuses for those killers.  Oh "what did we do to piss them off" said many liberals and apologists.  And that attitude by the left is on display every time there is an attack.  Europe has tried to walk the line of not making it appear they are concerned the killers are of the Islamic faith.  Every time I listen to a European leader speak on immigration I say to myself "are you nuts"?  They let these people in as they seem concerned about the birth rates and replacement people for their countries.  But how can they not see they are bringing in people that refuse to assimilate into their culture and lifestyles?  They are committing suicide!

The terrorists in many cases are first generation jihadi’s who never assimilated and never learned the values of life itself.  They practice the culture of death.  But how many innocent children will die because the leaders there don't want to be called bigots?  When you look at the numbers worldwide I say to myself who is really the bigot?  There are 1.6 billion practitioners of Islam and we hear that 20% like Jihad and beheadings.  So 300 million people want you to lose your head.    But our western civilization still tries to be PC in the face of this threat.  And the liberals and the left make excuses for them.

Here in America, we are a little bit more pragmatic but not much.  Last week Kathy Griffin held up the bloody head of a Donald Trump look-a-like and all hell broke loose.  Even in little Nevada County, we saw blowback to the despicable act by Griffith.  And then we heard the apology and my goodness, we white males made her do it!  That is the latest mantra of failed people in America.  Whether some women or people of color, if they fail or are caught doing something untoward.  They blame those "old white males" for causing them to stray.  Excuses galore.  But what does that get them?  To me, a "white male" it gets them excoriation.  They cannot accept that sometimes failure happens and it may be their own fault.  But now they have a reason other than their own shortcomings for their failures.  ME!

Somehow the "white males" especially the old ones, are to blame for the lack of success for these snowflakes.  But those moms and dad's that work hard every day to give themselves and their kids a chance in this competitive world are now the reason for defeat.  I could care less what color or religion and gender (two) you are, you have the capability to succeed in this country.  If you can't move to Europe and complain.  They will take care of you.  They will let you live well as long as you complain.

Are we getting sick of all this blame game?  I try to do my part in exposing these whiny snowflakes who can't seem to accept personal responsibility.  But there are so many it is hard to keep up.  And then the media types, 95% voted liberal, spread the "shame".  Here in  California politicians even let felons out of prison as they feel guilty these lovelies got caught.  Oh my we need to lessen the sentences for crack over powder cocaine.  And the death penalty?  The killers did not give a little girl a chance at life yet we spend an inordinate amount of money to "save" these killers from justice.  Hell, the left even tries to make the point that it costs more to execute a killer than to house them for the rest of their lives.  And some people believe that!

If the Western World does not wake up and get back to the reality of life we will become extinct.  If people want to live in the West they must assimilate.  If they don't the countries will see the erosion of their culture and the death of civilization.  We have to stop making excuse for those acts of depravity.  And we must boot out of power anyone that gives these people PC protection.  We must fight hard for survival.  The hope of the world is here in America.  We are the shining light of freedom and the importance of the individual and his/her life.  We practice life not death.  But the excuse makers don't have a clue that if we fail, they will be the first people stood up against the wall.  You want the Iranians in charge?  Assad?

We need to get tough with the rules on becoming an American.  Sign a pledge, bring in assets and learn the language.  No more "diversity is our strength” BS.  Americans are a distinct people and if you want to live here you must become a flag saluting, oath taking English speaking citizen.  Nothing less will save our country from the abyss of depraved people making excuses for murdering the innocents.