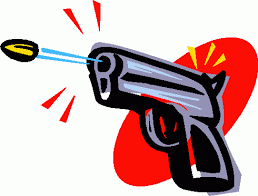 Maybe the Mayor of Baltimore and the gal running the State's Attorneys office should rethink the indictments of those six cops?  Apparently people with guns, mainly if not all minority folks, are blasting each other into oblivion.  HERE is one news story on the violence. 28 shootings and nine killings.  Not one by the police!  And in a city with tight gun control laws.

I don't want to make light of the shooting but in my opinion, this city brought all this on itself.  Demean the cops, the protectors, even jail them, and this is what you get.  It can happen anywhere I suppose but I see these inner city problems almost unfix-able.  I think most people want to be safe, feel safe, and have a peaceful life.  But we see the thugs running rampant and they all have weapons.

I think we need some tough love in these cities.  Maybe across the whole country.  The left has infected the country with PC and this is how it manifests itself in real life.  Sure we all want to believe "there but for the grace of GOD go we" but this is now getting out of control.  Blacks are murdering each other in big numbers.  Some innocent bystanders are getting shot too, some killed.  Like the streets of Chicago in the 1920's when the Italian and Jewish gangs were spraying the streets with bullets, the citizens have to rise up and say no more!

The citizens of these cities who are so outraged at the cops may get what they want.  Neutered policemen who will maybe look the other way so as not to get those criminals mad.  Hey, all those thugs could get together and form the Criminals R Us Syndicate.  Have some by-laws and elect some people like Baltimore's Mayor and Maryland's Chief Attorney.  Yep, and all those thugs will have good, taxpayer funded lawyers when they get busted.

American cities have lost their minds.  No wonder people moved to the suburbs and rural areas where their is a bit of common sense left.  But if the cities like Baltimore and Chicago keep in place their ridiculous politicians and rules, they will reap the whirlwind of lawlessness.  I hope the people in those cities stop feeling sorry for themselves, buck up, take responsibility for their own lives and stop blaming cops and others.  Maybe then things will improve.  If not, the they become "murder city".
Posted by Todd Juvinall at 7:23 PM