Since my longest and best friend is from Birmingham, Alabama, he always makes sure I know his college team is playing.  Well, I knew that anyway but he likes to rub it in.  His team, the Alabama Crimson Tide, has now won three of the last four BCS titles.  They are tough and have a superb coach on Lou Saban.  They kicked Notre Dames ass all over the field.

During the game, Brent Musburger, announcing the game for ESPN, commented on the beautiful woman who he said was A.J. McCarron's the Bama quarterbacks girlfriend.  The camera lingered on her and Brent made some comments that had me agreeing with him whole heartily.  Now we hear he is being chastised for those comments.  The PC babes and the liberal fem-men are outraged at Brent.  Well, I say to those nuts, SHUT-UP!  Let the real men, the ones who appreciate a beautiful woman, have a few minutes to look and appreciate that beauty.  You women who think those comments by Brent is so bad must be intimidated or jealous.  There can be no other reason.  It has to be pure BS.  Well, from a liberal mindset, bad is good, ugly is beautiful and a moron is an Obama voter. 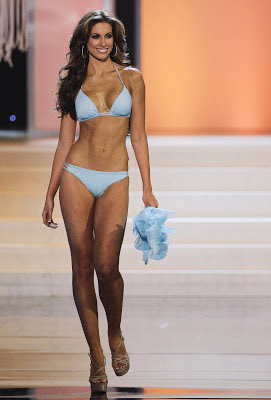 Here is a picture of Miss Katherine Webb I found on the Internet.  If any man can look at this picture and not wish he was the Alabama quarterback then he must be a eunuch.  She is a total beauty and every woman on the planet should strive t attain this level of beauty.  If every women did, every man would forever grateful and the roses and trinkets would shower over them.  Have a nice day and Brent M. you are now my hero.  Don't apologize for telling the truth.
Posted by Todd Juvinall at 9:17 PM