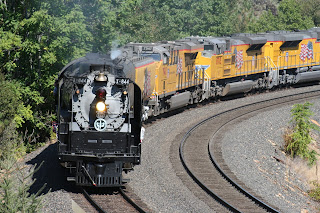 Back in September 2012 my boss informed me that #844 was coming to California from Iowa.  The locomotive was stored in Council Bluffs and was going to be sent out for the 150 year old anniversary of the Transcontinental Railroad.  It would stop at many places along the way to Sacramento.

HERE is a more in-depth article about the engine.  The last great steam engine.

HERE is a more detailed article from UP on the trains trip to California.

So on a midweek day, my boss said he wanted to go meet the engine as it came into the Colfax station and would I like to go?  Heck yeah.  I loved trains, something most males do, and to see the engine up close and personal was just fine with me.  So we headed over to Colfax.  We took the left at the burned down Giovanni's Restaurant and then took a right down to the tracks at the long turn after Cape Horn.  To our surprise there were fifty or so people waiting there and all had their cameras ready.  I chatted with one fellow who had traveled from Truckee where he has begun his day of picture taking.

Pretty soon we heard the rumble f the engine on the tracks coming around a distant curve and within a short time, there it was coming right at us.  It was a huge engine!  It sped past us on its way to a stop in Colfax.  We jumped into the truck and sped there to see the train stopped and ready for inspection.  We took some pictures and were able to stand right on the tracks with a couple of hundred others that came to see this beautiful work of art. 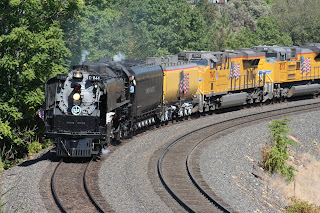 I have mentioned in a earlier post on LINCOLN that he was the instigator on the construction of the Transcontinental Railroad.  He was convinced prior to his election as President that America needed this connection from east to west.  When he became President he urged Congress to pass bonds to pay for the construction of the line.  There is a great book by Stephen E. Ambrose called "Nothing Like It In the World".  I read it and you should too.  You will get a inside look at Lincoln and the men from California who made the railroad a reality.
Posted by Todd Juvinall at 8:47 AM