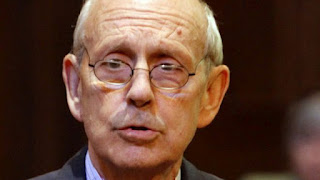 It appears not even a SCOTUS Justice is  not immune from crime.  HERE is the article and in my view it could not happen to a more deserving human. I know, I know, I am being a bit callus but when you read the decisions this man makes as a Justice and the lack of his common sense, maybe the good Lord is sending him a message.  The message is possibly "no one" is immune from real life happenings, even crime".

Breyer is  true liberal (appointed by Bill Clinton in 1994) and I have watched and listened to him a few times in interviews outside the SCOTUS chambers.  He has a disconnect with real people and their real life problems.  I recall his ridiculous statements in the Kelo decision a few years ago.  The one where he somehow justified the use of eminent domain by a town against people's property for the benefit of a private developer.  He then took a vacation to his second or third home in the boonies (and was picketed by property rights proponents).  An elitist as far as I can see.  But now he gets to see the real world people's problems up close and personal in the two instances of crime.  One was a machete wielding thief at Breyer's vacation home in the Caribbean and the other a burglary of his possessions at his Washington DC home.

Could these instances of crime help Breyer become more "human" in his decisions?  Karma?  Or will these acts just become words in a impersonal decision about some esoteric position on the "law"? What is the old saying? You are  a liberal in your youth or you don't have a heart but a conservative in your 40's or because you finally  have a brain, or something like that.  Well, when you get robed at machete point how does that affect your view on say, firearms or threats or murder?  Or if a crack addict robs your house of your family silver how does that affect your views on property rights or drug abuse or personal responsibility (it is all society's fault, or the "man's" fault they robbed me)?

Apparently after the Gifford shooting in Tucson last year where a Judge was also killed, Breyer has asked for more protection.  Kind of interesting when you see his decisions on the death penalty and his lack of a position on California's lawsuit about the crooks being released and realigned.  Breyer did not take up the issue which many Californians believe will have dire consequences for the law abiding public.  But the SCOTUS decided not to interfere with the Federal Judge's decision to force our State into Federal servitude about the medical rights of the inmates.  So maybe Breyer will change his mind about the rights of the people of California?  Naw, he won't because he and the liberals of the SCOTUS prize the life of the inmate over the rest of us.

So here we get to see the true hypocrisy of the left.  The Dianne Feinstein's and Rosie O'Donnell's who want to take the weapons from the  law abiding citizens through their laws and decisions while they keep theirs and have bodyguards with guns.  Breyer wants more bodyguards with guns but doesn't want us to have the same rights and of course he can make that stick if he has his way.  Crime happens to everyone.  I was robbed at gunpoint when I was 21 and it sucks.  But it did make me more of a "throw the bastards in jail" as a philosophy and maybe, just maybe, the Breyer's of the country will have some more respect for the rights of us rather than the criminal parasites on the body public.  Well, I can always hope.
Posted by Todd Juvinall at 9:34 AM