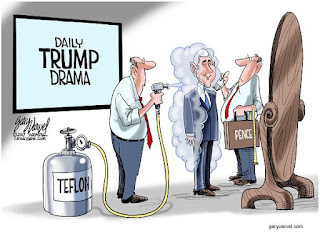 I am old enough to remember the days when President Reagan was called "Teflon" because things just did not stick to him. The democrats were as bad then as they are now.  The difference is there is 24/7 cable and social media that inundates the airwaves with "news".  We note that most of the news we now call FAKE NEWS.  And after three years of a witch hunt to foist a "coup" on the American electorate, we finally have some peace.  The release of the Mueller Report, 450 pages in two chapters, and the "exoneration" on all counts of alleged "collusion" and "obstruction" should have been the end of it all.

Teflon Trump is working his magic.  In the case of the witch hunt, I and many others knew it was a hoax.  We were derided as was Trump by the left and their goons but we stuck to our guns and were proven right.   But knowing it was a hoax was not enough.  The democrats as we have seen lately could care less about the truth.  They simply embark on another "birther" type track and not a ounce of moss gathered on their sorry asses.  Even local idiots like RL Crabb has yet to apologize for his seditious cartoons and comments against the President.  The left only apologizes when they are caught screwing another woman, not their wife.  They trot the poor wife up next to them as they tell the people how sorry they are for screwing them and the other woman.   Then they get promoted in the democrat party and are usually awarded a TV show. California's present Governor is a prime example.
The same trolls of the democrat party can't seem to ask forgiveness for tearing the country apart and dividing it even more.  They lied about everything and Trump told the truth.  But the press won't allow the American people to take a breath and relax.  On to the next load of crap to try and tarnish Trump and the 63 million that voted for him.  Now the democrat controlled House of Representatives is trying to get Trump's tax returns.  And they want his kid's returns and even his 12-year-old son's.  They want all his business records and everything else.  All before he was ever an elected person.  We call this a "witch hunt" and a smear.  While RL Crabb and his goons write these ridiculous attacks on Trump and his followers, you never see anything about the left and their travails and lawlessness.

But it will all play out over the next two years.  Luckily the democrats have a clown car full of idiots running for President.  They are a gift that keeps on giving.  Now the party of diversity has a bunch of mostly old white men in the lead for the nomination.  The rest are stepping over each other in their pandering to every disaffected group in the country.  Women, people of "color", felons, terrorists, sexual deviants and candidates with affection for the old Soviet Union are running amok across the land.  Seems that RL Crabb would have a field day of cartoons with all that.  Yet crickets.

America is being held hostage to the loons of the left and their mouthpieces we call the mainstream media.  The media reports fake news all the time.  And to me, the worst they do is choose not to report things that might hurt their ideology.  You are being shortchanged every day by the Editors across the land who fail to print the real news.  They have you believe the left is a pristine group while the right are maniacs.  Of course with alternate sources now Americans can and do read other news.  And yet with declining subscribers and viewers the newspapers and TV News refuse to be fair and attract the people of the right.  That tells me it is all ideology, not business.

With all the problems Trump is trying to fix for the country, you would think the democrats might find a little common ground with the Republicans.  But they can't get their heads out of their asses long enough to breathe the fresh air of accomplishments.  Oh well.  In spite of all that fake news and liars called democrats, Trump is making America great again and that sits well with me and my fellow travelers.  Lowest unemployment ever.  Women, blacks, Hispanics and Asians working.  While the democrats are still refusing to leave their momma's basement and give up their PJs and Cheetos, the rest of us are working hard to keep the country moving ahead and safe.  Maybe the left will learn they can't have it all their way.  Spoiled brats and ingrates usually get their comeuppance.  All the while President Trump is Teflon and they can't get over it.
Posted by Todd Juvinall at 5:49 PM