I was invited to a fundraiser for Crime Victim United in Sacramento last night at the Hilton in Sacramento.  The draw was the keynote speaker, Sheriff David Clarke, Jr. of Milwaukee County, Wisconsin. I did a previous article on him in Sierra Dragon;s breath last May 2016.  HERE.

It was well attended and the funds raised are used for helping victims.  The leader of the non-profit lost a sister to murder many years ago and as a result was schooled on how the system is all about the perpetrator and not the victims.  I saw lots of Sheriffs and Police Chiefs from all over the state.  Senator Jim Neilson and his Cheif of Staff, David Reade were there too.  And the "Berkeley Boys" were there too.  These Republicans go to that school and were attacked by the liberal thugs in February.  Our Sheriff was there as was our DA.  Not many if any identified as a democrat were there.  Sheriff Clarke is a democrat and has been re-elected many times in the county containing a urban city.

The Sheriff gave a speech mainly on how we need to stop coddling the criminals and get back to punishment.  He used California's Prop 47 as a example of those unintended consequences liberals think are great.  Crime way up in ten of the 11 most populous cities here.  Recidivism rates are high and those criminals really know how to manipulate the system. 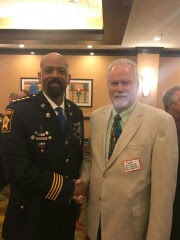 We see the Sheriff on major TV programs on a constant basis.  The reason is he is a common sense man.  He makes no excuses for the bad guys.  He believes the regular people victimized by the bad guys should be given the time and respect they deserve.

I also got a signed copy of his book.  What a treat!  COP UNDER FIRE is a best seller and people should get it and read it closely.  All about his life and respect for law and the Constitution.  And his positions on not coddling the bad guys.  Very refreshing.  Of course, during the last election cycle, Clarke supported Trump.  And as a democrat he took a lot of fire from critics.  But if you watched him on TV as part of a panel or alone, he was all about the law an supporting the police against liberal attacks.

The police are the thin blue line between the law-abiding folks and the criminals.  Since Obama and Holder appeared to always be in the camp of the crooks, the police got attacked from the top down by the left.  We saw bad cops arrested for bad things but the Obama/Holder/Lynch administration painted all cops as bad in my view.  And we saw police assassinated as criminals felt justified to do so by the rhetoric of the left.  So Trump was supporting police and the military and guess who got most of their votes?  I was hoping that Trump would pick Clarke for a position in his administration but not yet.

America needs more people in charge like this good man.  And maybe his speeches will turn the tide of the negativity we listened to for eight years of Obama.  Even today we see Attorney General Jeff Sessions starting to dismantle those AG orders taking over local police departments and how they do business.  Like the one in Ferguson Missouri.

Sheriff Clarke is a rock star and it was a privilege to meet him and hear his words of common sense.  My guess is the man, 60 years old now, will be heard more and more across America.,