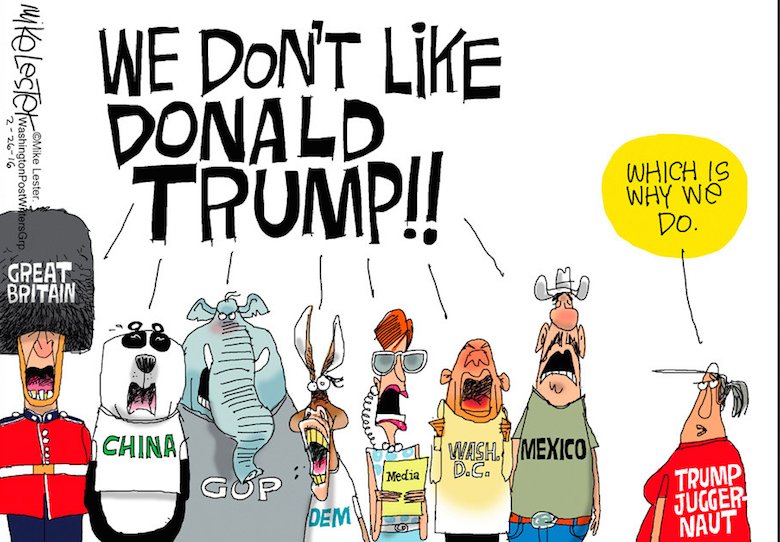 I had abandoned the Bee many years ago as I got sick and tired of their liberal BS and lousy reporting.  But about a year ago they contacted me about a "hot" deal for Sundays.  Well I thought to myself, "why not?"  I can read the liberals crap and see if if anything has changed in their minds.  Well, of course they are still all the same.  Nothing to see here.  But I am fascinated with how they think, or don't.  Their world is far different than mine.  Today I read some of the most ridiculous things from liberals it cracked me up. HERE is one.

The Bee even has a article on how Trump's victory will affect tourism!  But the most telling is how the left criticizes and accuses the right of all these terrible things in life.  They use racist talk to accuse us of racism.  And all these calamities are just because white people don't like another group.  One article by a ACLU gal from Northern California was the epitome of scare mongering.  And how she and the ACLU will protect us from those awful Republicans.  Of course the list of protections she fantasizes about doing were never done in the Obama Administration.  Nothing done against his illegal policies.  Not one thing.  But I guess that is simply what liberals do.

HERE is a screed from a black woman who took a taxi and had a drink at a local bar and gained insight into Trump voter regret.  You cannot make this stuff up.  A couple of people makes a tidal wave opinion to a liberal.  Amazing! This is the best the Bee can come up with?

HERE is a liberal who decries the positions of Republicans in 2008 for stating they will fight back on Obama's policies to go socialist.  This dope just got apoplectic those people were not jumping on board the Obama train and tells us how terrible they are.  Now he is all in to do the same thing he decried to Trump!  These people are schizophrenic at best.

These articles in the Bee reflect the mania from the left quite well.  No common sense, emoting all over the place for the smallest reasons.  They claim ownership of all the compassion there is.  They say we on the right are all those terrible things they make up in their heads.  For goodness sake.  Democrats started the KKK!  It took Republicans to pass the Civil Rights Act and the Voting Rights Act.  Democrats tried to defeat it. 500,000 men died to free the blacks from the democrats in the Civil War!  Hillary Clinton gave a warm eulogy for KKK guy Robert Byrd.  Bill Clinton's mentor was a racist!  Republicans have been accused of the things the democrats actually do!

These whiny little lefties are in need of their "safe spaces" as the world is really a tough place.  They have decided that the military is unnecessary at the levels that keep the barbarians at the gates.  They think there should not be a border so 600 million people could move here just from our hemisphere!  They profess equal outcomes and disregard the facts that we are for equal opportunities.  They are all in for government telling them what toilet paper to use.  The Obama Administration did not understand that Americans, for the most part those on the center and right are all about freedom from overbearing regulations on their lives.  It took a bombastic developer to shred PC and tell the country what it is all about.  And he won!

So since this is America, you liberals go do what you do for the remainder of the Trump term.  Whine and complain.  Drag everyone in to court and keep those trial lawyers busy.  It seems like America takes a step forward and you liberals drive it back four steps.  I say live with it.  We did for eight years of Obama policies and now it is your turn.