I am looking forward to seeing the Congressman and so are the folks going with me.  It will be at his farm in Richvale inside the huge metal storage building.  That building is transformed from a parking place for his huge machinery to a banquet room.  I expect there will be a lot of people there.

With one year under his belt as our Representative, LaMalfa is the consummate "citizens" representative.  A farmer who went to Sacramento then to Washington DC, sort of like Mr. Smith.  He is a nice man, a regular chap and quite friendly to all, even his critics.

So tonight I will listen to other politicians speak and Doug to inform us all about the DC world.  A place far from the farm lands of Northern California.  I for one appreciate his stance against ObamaCare and runaway deficits and overspending in our Federal system.  We need more people like him and hopefully we will get them.  ObamaCare has come to fruition and now every single American will be impacted by this ridiculous UnAmerican attempt to control us down to our civvies and DNA.

Now we see what a "law", contrived in the backrooms of DC, tainted by the bribes to individual Senators, rammed though in a totally partisan vote means to each American.  The bills will be arriving and I know they will be received with shrieks.  More money, less coverage, and you don't get to keep your own Doctor.  ObamaCare is the gift that will keep on giving for the demise of the Democrat power structure.  Its ripple affects across the land will relegate the perps, the democrats, to minority status (except California unfortunately) for years to come.  And the power to return America into the land of the free will be exercised by our own Congressman, Doug LaMalfa. 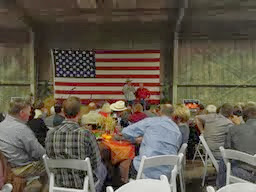 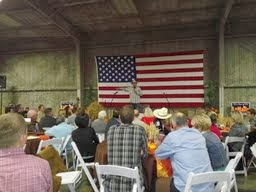 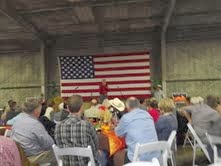 It was a very good turnout.  The LaMalfa family is a true American nuclear family and all their relatives chip in to help as well.  300 people or thereabouts showed up.  Saw a lot of old friends.  David Reade, Chief to Senator Jim Neilson was there and we chatted it up.  Doug and Jim were meeting everyone.  Nice dinner of beef, chicken, Caesar salad and some beans.  Ala Bill Schultz BBQ style.
Posted by Todd Juvinall at 8:54 AM