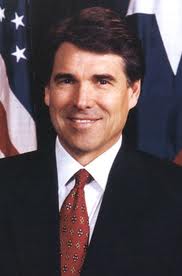 I don't know a whole lot about Rick Perry, the present Governor of Texas, but what I do know I sure am impressed by him.  HERE is a George Will article about the man that can bring us up to date about him.  Since the field of Republican candidate is so large and the election season so far away, I, like many people have decided to wait on who I am going to support in the primaries.

The left and even the local Nevada County leftwingnuts, bloggers and non profits parasites, are doing their best to slime our candidates and prop up their failed President, Obama.  Sure, no man or woman is perfect, heck, look at me for goodness sakes, but the liberals and their sycophant lamestream media pals are already dredging up third grade misdeeds by our people.  I actually like people that are not trying to be perfect and have led lives of risk and adventure.  In Perry's case, he was a democrat until 1989! Now that's risk!

I have always been partial to Governors becoming President.  They are executives and that is what the President is so it fits real well. I even have kind thoughts for Clinton! Yikes!  The field of Republican candidates is so far superior to any democrat that I am totally optimistic the American people ill agree and boot the democrats from even more posts across the nation.  Rick Perry seems to me to be a very well qualified man, serving the longest tenure as Governor of Texas in their history and now the longest serving Governor in America.  Sure he has his problems but his state and his policies have created more jobs in Texas than the rest of the nation combined during this downturn.

Regarding the deficits which every state has been dealing with this last and present decade.  I even give democrat Governor's a break because I know why there are deficits and a lot of the problem is mandates from the feds.  Yes, California and New York are exceptions because they are being run by kids, kids from the democrat party.  The rest though, they have to deal with the Medicaid and Medicare mandates that are now stripping all levels of government with regulations without the commiserate dollars to offset them.  We in our little county have trued to fix that since it really got started in earnest in the early 1980's but to no avail.  When the mandates started tearing up the state budgets, the politicians started finally paying attention.  Now we have a huge number of American voters who "get it".  The Tea Party.

So Rick Perry is now the target of the elitist leftwing media and the democrat slime makers who claim Americans don't want another Texas Governor as our  President.  They are doing their best to create a fact from fiction.  American voters in my view will want a President who will solve the problems, not sugar coat them and dodge around them.  Usually a Governor is a pragmatist (except in California's case, Arnie and Gray, and Sptitzer the perv from New York.

The rest of the field is also strong.  Romney (who I voted for in 2008), Bachman and the others are all much more qualified for the Executive branch than the "community organizer" we now have.  So, I am going to e patient and see who is in and who is out and not get all excited yet.  Perry, if he jumps into the race, will be a formidable foe and after his bruising primary reelection in 2010 against Hutchinson, he proved he could take the lamestream media slings and arrows very well.
Posted by Todd Juvinall at 7:58 AM