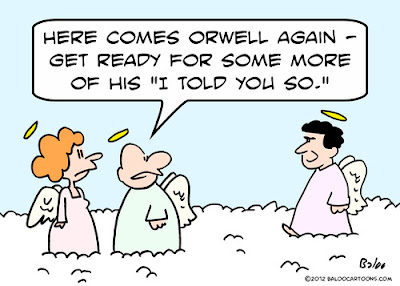 One thing about mass media on planet earth these days, they sure spout a lot of Orwellian mumbo-jumbo.  I have been saying this for many years.  I saw it in government locally thirty years ago and I have seen it every day since, all over the news and mass media of entertainment.  I think to myself, "how can they actually think that way"?  Meaning the left and in many cases feminists.  Back when feminists were starting out I saw their proponents reacting to historically accepted interactions between men and women.  Don't open the car door or the door to the house, "I can do that">  "Don't tell me I am beautiful".  I was taken aback that even small compliments were rejected as attacks on feminist beliefs.  A couple of days ago we saw this attitude by the left in the observation of President Trump and France's First Lady.  He is reported to have said,

" You're in such good shape," Trump told the French First Lady. Then, appearing to turn to Macron, he remarks, "she's in such good physical shape. Beautiful isn't she beautiful"

Well the fire works were off.  My goodness, you would have thought he said she was a pig?  They complained about this set of compliments.  So what do the feminists say should be said?  And crickets prevail.  My goodness, the people that were critical of his statement must be mutts and never had a date or a compliment.  Basic human interactions are verboten to those Orwellian feminists apparently.

It seems to me the left is really trying to change the human meanings of words and phrases and the news media is their "strike team".  Batter someone constantly and try to embarrass them into silence.  If violence in Berkeley by the "Antifa" thought police is any indicator of where the left's actions are headed, America and the free world are in trouble.  We cannot let them gain a foothold past what they have now.  Trying to silence someone who simply tells an obvious truth or fact is not American in the least.  Trump likes to compliment women.  He was the owner of the Miss America and Universe companies.  All for the benefit of helping women achieve greater things.

So he compliments a woman for being in great shape for a sixty something gal.  I thought it was great that he pointed that out.  In America, we are supposed to not pay attention to a fat person's weight anymore.  Even though they and the rest of us know it is bad for the health, and good for "junk food" purveyors, we must not mention the obvious in conversation.  OK, sure, we are all sensitive people and try not to say bad things or things that may hurt others feelings.  I don't because those people that are obese say they are not at fault. So we are to remain quiet, except the media does not.  They actually have programs on cable that are all about a "600-pound life" or "Naked and Afraid" or other ridiculous ideas.

And so we are supposed to watch this crap and not have an opinion about the obvious?  The huckster "Jerry Springer" has these kinds of miscreants on every day and all those talk shows invite the oddest and goofiest people on so we can yuck it up about them.  I guess to get ratings?  But our President is chastised by the mass media buffoons and the feminists for complimenting the beauty of a woman?  See the Orwellian angle?  If a person has an immutable trait there is no place for ridicule of course.  But as people make choices to be lazy, fat or living a lifestyle dependent on others largess, then I think they are fair game.

If you are a lazy ass and don't want to work for your porridge, then food stamps should be a form of paper like it was and not these "credit cards".  Bring back a little shame to those that are taking advantage of the system and the goodness of the rest.  But no, we have to look out for their feelings.  Having worked all my life and paid taxes and fees in the high 6 figures, I have a little resentment about the lazy folks.  I have seen it all my life.  Of course, those that are truly in need we need to assist, but not support for generations.  We supply as taxpayers, free K-12 schooling for all.  And many whiners drop out and can't even take advantage of the huge and costly "freebie"!  So we get a huge number of people not carrying their weight in our country.  But OH MY!  Don't point out the obvious as the liberals and their lackey's of Orwellian thought will beat you up.  And make excuses for the neer-do-wells.

So somehow we as a people need to reject all this political correctness BS and get back to the common meanings of life and what words actually mean.  All this coddling of people who game the system or are upset with a compliment must be ridiculed and rejected.  Americans cannot let the left dictate our speech and the meaning of words we all know.  Push back.  Of course, they will come after you and try to intimidate you into silence but stand up and don't let them.  We need to return to having some guts about the things that are real and not worry so much about hurting a scofflaws feelings.
Posted by Todd Juvinall at 11:28 AM