Well I did something I never thought I would ever do yesterday.  Since I live in a small town and county I rarely saw a protest larger than five liberals on an overpass protesting their daily outrage against conservatives and Republicans.  I never took part in a counter-protest and had only one instance where I actually organized a protest.  That was a rainy day well-attended protest of KNCO when Steve Brock fired Jim Ruffalo many years ago.

I traveled to Berkeley with a friend John to take part in the "Patriots Day" protest for free speech on tax day.   We boarded the train in Auburn at 8 AM and got to Berkeley about 10 AM.  We met some friends and took a UBER to the park on Martin Luther King Boulevard.  When we arrived there were a few hundred of the Patriot Day folks and a few hundred fascist protestors.  The police had fenced off the park and at the entry points took anything they deemed a potential weapon.  My group had an American flag and a staff on which it was mounted.  The police took the staff and our bottled water.  Apparently, the fascists were throwing the bottles at our folks. 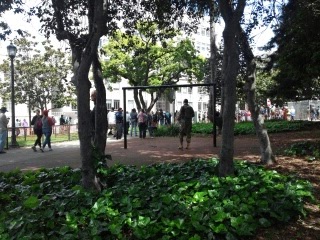 So we went to the makeshift podium and listened to men and women, black, white, Latino, Asian, speak to all through a loudspeaker system.  They need that amplification as the police had two helicopters hovering above and jeez they were loud!  As I sat on the bench I observed a number of our people returning to the front for medical help.  The fascists had peppered sprayed them and punched them.  Guys and gals.    The medical assistance was milk sprayed in their eyes to relieve the effects of the pepper spray.  Oh, before we arrived, one of the organizers was attacked and his face sliced by one of the masked fascists.  He was in the hospital during the protest.

The speakers went for about two hours and they were all concerned with the "free speech" rights they felt are under attack by the left and their fascist supporters.  Just a month or so ago we all saw the attacks by these fascists at the speech to be given by Milo.  This day was a bit less violence but it was still the fascists that started it all.  Our side simply was defending themselves.  The press reported today made it appear the Patriots were equally to blame.  But that is not what I saw.  And then we had the nuts from the left tossing M-80's into the crowd.  A very large and loud "firework" bomb.  They must have tossed in 10-15 of them and each time they go off everyone jumps.  Very mature eh?  NOT!

I was happy to see a contingent of private security there.  Men, big men, dressed with "Security" on their shirts came from across the country to help.  I wonder how many of the fascist punks tried to attack these guys?  Probably none.  The rowdies liked smacking women and skinny kids.  A couple of times the fascists charged through the fencing and tried to surround the speaker's platforms but were turned back.  Nice to have some tough people there.   All in all it was an interesting day.  I actually did not personally see a fight.  But later on the news, I saw some people being attacked.  The dishonest press, however, did not identify the instigators as the fascists and left the idea it was the Patriots.

That is the other thing I noticed today.  Drudge had some links and some videos from the day.  I watched and listened to what and how the media bias is at play.  Then this morning I watched a report on KCRA Channel Three and there it was again.  A bias that would convince the uninformed it was all about the Patriots being the instigators.  No wonder we all say the media is dishonest.  Trump is right!

Yesterday we say the liberals of America March to get Trump to publish his tax returns.  I just shake my head at how these idiots think that is more important than getting nuked by the chubby Kin Jong Un.  Of course, the press was covering those marches with all their might.  I urge Trump to tell them NOPE!  He got elected without them and there is no law requiring him to make them public.  I say to the democrats, lead the way men and women.  Publish yours you Senators and Congressmen.  Let we Americans see you put you returns where your filthy mouths are.  And in California, the kids under the dome in Sacramento will pass a law to force tax returns to be published.  I say they need to do it voluntarily now.  Nothing to stop them.  But those returns might show the graft they get.

After the people left the park, we went to a local pub and had a coca-cola and discussed the day.  After that we all went to dinner and we were joined by some young Republicans who attend UC Berkeley.  We all them the bravest people as they are under constant surveillance and attack by the thugs.  We returned late last night and all of us felt better that we took part in something bigger than ourselves.  A gathering to stress and preach the importance of the "free speech" we used to take for granted.
Posted by Todd Juvinall at 10:08 AM